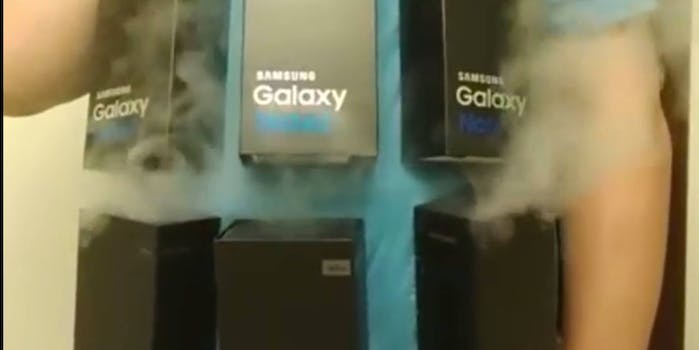 The key to a great Halloween costume is timeliness. My Paul Ryan working out costume from the 2012 election just doesn’t hold up one Trump election cycle later, and no one is going to be impressed by your Stranger Things get-up this time next year.

Enter Chris Kiley, who’s managed to shock and surprise with his topical take on a “fire hazard” costume.

Samsung’s Galaxy Note 7 has been an absolute disaster. It’s been recalled globally, after countless devices caught fire for inexplicable reasons, including once on an airplane, and Samsung actually sent out fire-proof boxes for customers to use for their returns. The Note 7 is now banned on all U.S. flights.

As Kiley was quick to note, what he’s wearing is not a suicide vest—even if a literal version of the costume could be construed as such. “I’m making fun of Samsung, not ISIS,” he wrote on photo-sharing site Imgur.

This is actually only one-half of Kiley’s costume. His fiancée is going as a firefighter and will be following him around with a fire extinguisher.

You can check out Kiley’s full how-to tutorial on Imgur.

This Halloween I’m going as a fire hazard (OC) (plus instructions on how to make your own!)