This phone is dangerous.

Ever wonder how a company expects you to send an exploding phone back for a refund? Thanks to the magically defective Galaxy Note 7, we finally have an answer—and it’s absolutely nuts.

With tales of the Note 7—and its supposedly safer but still explosive replacement units—bursting into flames on planes, in homes, and even during shipping, Samsung is taking no chances with its returns. Now that the phone is officially discontinued, every Note 7 owner gets a full package kit, complete with fireproof packaging to keep the phone from bursting into flames during the shipping process. 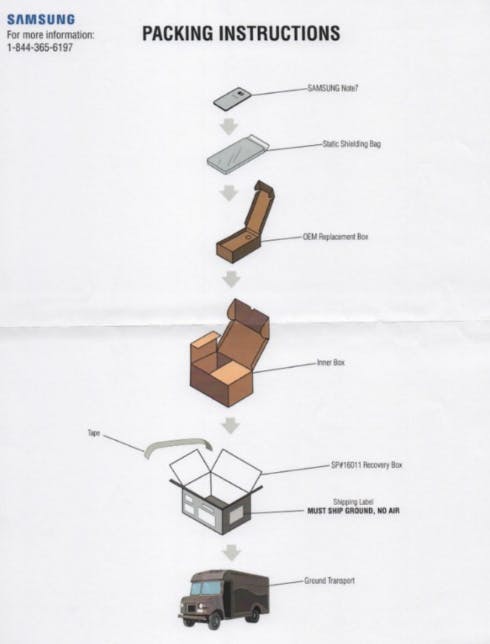 In a video by XDA Developers, the kit is broken down and explained, and it sure is a doozy. For starters, the kit comes with plastic gloves, for some reason, along with a total of four layers of packaging that stand between the phone and the outside world.

The phone itself—which, just to remind you, literally explodes sometimes—must first go into a static-proof bag. From there it goes into a small standard cardboard box, and then that box goes into a larger cardboard box. Finally, that second larger box goes inside a thermally protective box, which can then be shipped back to Samsung.

But that’s not the end of the Note 7 shipping saga. Even with such extreme security measures being taken with its packaging, the phone cannot be shipped via air transport, and every single defective Note 7 is going to have to find its way back to Samsung via ground shipping. Now that’s one seriously dangerous phone.