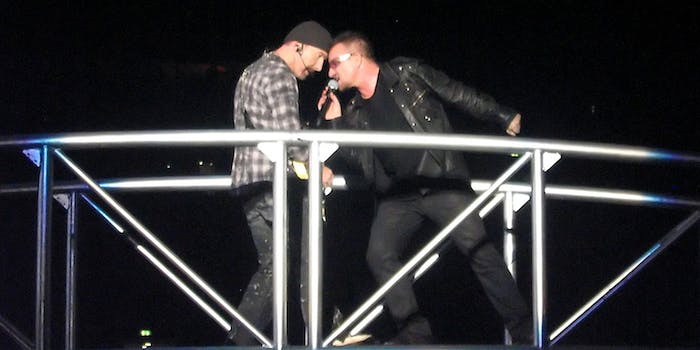 You don’t have to be a record store clerk or classic rock aficionado to know that gay culture has hugely influenced the progress of rock music. From Elton John to Freddie Mercury to George Michael, gay musicians have made all-world contributions to the genre.

U2 is not part of this group.

Recently Starovoitov, a member of Russia’s far-right wing LDPR party serving in the federal Duma, has been crying havoc over Apple’s free U2 album giveaway from September. And although there’s plenty of reason to be annoyed at waking up one morning and finding an unwanted album inserted into your iTunes library at the behest of Bono’s own hubris, Starovoitov has an entirely different set of objections.

The Guardian reports that Starovoitov considers Apple’s decision to automatically download the album to users computers in violation of Russia’s staunch anti-gay propaganda laws—the same laws that have enabled widespread discrimination of Russia’s LGBT community in recent years. Starovoitov’s beef is with the Songs of Innocence album cover, which features an image of shirtless drummer Larry Mullen embracing his also shirtless 18-year-old son.

Now of course one could correctly interpret this album cover as being about a man’s struggle to hang on to youthful innocence, what with the album being title Songs of Innocence. But Starovoitov believes the cover art is intended to promote gay sex, like how the cover of Nevermind was Kurt Cobain’s effort to promote baby-drowning.

If Starovoitov is successful in charging Apple with a violation of the country’s propaganda laws, Apple may be forced to cease operations in the country for 90 days and pay a $19,400 fine, which Tim Cook, the company’s now openly gay CEO, would probably gladly pay with the money he’ll make this afternoon.