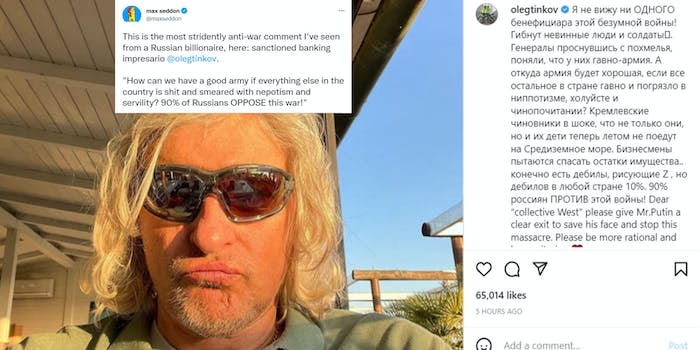 Oleg Tinkov begged the West to 'give Mr. Putin a clear exit.'

A wealthy entrepreneur has become one of the most prominent Russians to publicly oppose its invasion of Ukraine.

Russia invaded Ukraine in late February. The war has been characterized by devastating destruction, civilian casualties, and accusations of war crimes by Russian forces, which collectively inspired widespread support for Ukraine in Western nations.

Russian President Vladimir Putin, who’s widely viewed to be solely driving the war, refuses to back down even as his military is being forced to retreat in some areas. Russian attacks shifted eastward in recent days as it declared a new phase of the war.

Most Russians still support the war, the Washington Post reports, and believe Putin’s claim that their goal is to de-Nazify and demilitarize Ukraine. Ukraine and its allies resoundingly reject this argument.

To stifle dissent from the minority, Moscow has made it illegal to criticize the war. Some Russians have nevertheless spoken out. Thousands have been arrested at anti-war protests in the last two months.

On Tuesday, Oleg Tinkov bucked the trend of famous Russians toeing the party line. In an Instagram post on his verified account, Tinkov came out unequivocally in opposition to the war.

Tinkov, an entrepreneur whose businesses have ranged from banks to beer, was once worth an estimated $8 billion and one of Russia’s wealthiest citizens. Last month, sanctions by the United Kingdom over the war abruptly reduced Tinkov’s status to that of mere multimillionaire. He’s currently worth an estimated $800 million, per Forbes.

On Instagram, Tinkov wrote in Russian that sees no benefit to “this crazy war.”

“The generals, waking up with a hangover, realized that they had a shitty army. And how will the army be good, if everything else in the country is shit and mired in [nepotism], servility and servility?” he wrote.

He said that Kremlin officials are reeling because neither they nor their families can enjoy their customary Mediterranean vacations this summer and that businesses are scrambling to save their property, the latter likely an allusion to the British sanctions that personally cost him a purported $5 billion.

He wrote of “morons” who draw the “Z” that has become a symbol of Russian nationalism but said they comprise only 10% of the population. “90% of Russians are AGAINST this war!” he claimed. (Numerous polls have shown that a majority of Russians support the war.)

At the end of his post, Tinkov switched to English to beg the “‘collective West’ [to] please give Mr. Putin a clear exit to save his face and stop this massacre.”

“Please be more rational and humanitarian,” he wrote in conclusion.

Max Seddon, the Moscow bureau chief at the Financial Times, described it as “the most stridently anti-war comment I’ve seen from a Russian billionaire.” According to Forbes, Tinkov is currently residing in Russia.

Many were unmoved by what they describe as Tinkov’s about-face on Putin.

Others noted that Tinkov’s statement puts him at grave risk.

Hours after his post, journalist Farida Rustamova, formerly of BBC Russia, tweeted, “Deputy [Sultan] Khamzaev will apply to the Investigative Committee of Russia with a statement on bringing Tinkov to justice for insulting citizens of Russia and the Armed Forces of the Russian Federation.”