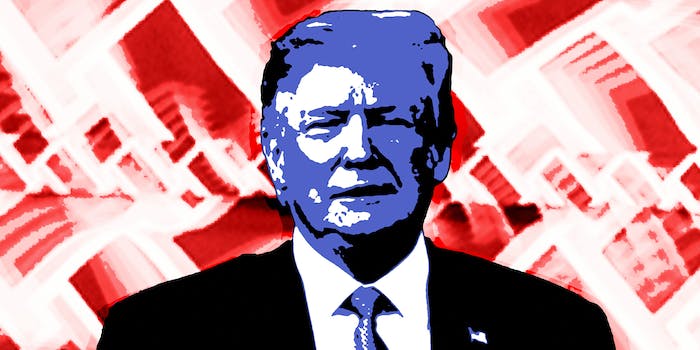 They won't take innocent for an answer.

Last night, Attorney General William Barr released a letter to Congress summarizing the findings of Robert Mueller’s two-year-long investigation into the 2016 election, in which Barr said Mueller “did not establish that members of the Trump Campaign conspired or coordinated with the Russian government in its election interference activities.”

It was enough for the president and his closest allies to declare victory.

While this was a great vindication for @realDonaldTrump & our family, it was an equally amazing day for all of his incredible supporters who stood by him faithfully despite a #fakenews media & Democrat onslaught the likes of which has never happened in our history. Thank you all!

That the investigation reportedly concluded without a recommendation of indicting the president or his son surely says a lot. Despite what a great mass of people has believed to be true, it’s possible the president didn’t conspire with a foreign government to steal an election.

However, a certain subset have been zealous believers in the influence of the Kremlin on President Donald Trump. (Some, in fact, believe there was a grandiose conspiracy to subvert American democracy through years-long cultivation of Trump as a Russian asset possibly beginning as early as 1987.) So a little thing like the head of the Department of Justice saying the former head of the FBI didn’t prove collusion happened doesn’t mean jack to them.

Here’s Russiagate’s biggest believer, Louise Mensch, on what she calls William Barr’s wonderful letter, which if you read it correctly is actually a damning indictment of the president:

Mensch says Barr’s language of how he notes collusion wasn’t “established” by the investigation is code to show that it did happen.

Now, here is where I think the letter actually gets brilliant. AG Barr points out that any American joining in the Russian conspiracies would be committing a federal crime. And what do people who have committed crimes have the right to?

Why, fair trials – and due process. You see, I believe that this means Mueller’s report will lay out the evidence he has found, or some of it, and then state that he has referred the criminal matters for trial.

Barr’s letter carefully states that “the Special Counsel’s office did not find”…. and Mueller uses the even more careful words “The investigation did not establish…”

“Establish” is a nice legal word. It means, in this context, “prove definitively”. And of course Mueller could not in fact “establish” this – he could not “find” this – because that is the job of a jury!

Mensch goes on to say that Mueller couldn’t say Trump committed a crime in his report because it would unfairly prejudice a jury who was going to try him for treason. (This ignores the great number of indictments Mueller wrote for other figures in the investigation where, in the indictments, he claimed they committed crimes, which is how an indictment works, but whatever, you know?)

Mensch certainly wasn’t alone in her theories. Many online who long believed in the Trump-Moscow narrative boldly proclaimed how they weren’t owned. Bill Palmer, who spent the past 600 days tweeting about how Mueller would be arresting Donald Trump Jr. for treason, declared that this was never about arrests but actually all about getting a report to House Democrats.

I said all along that Mueller didn't have a magic wand. His job was to give the House the tools to take Trump down. He just did. House Democrats just have to seize Mueller's full report, and we're immediately off to the races. This is why you worked so hard to win the midterms.

“I said all along Mueller didn’t have a magic wand” is a lovely backtrack from someone who frequently pleaded on Twitter for Mueller to arrest Trump for being a traitor.

The hilarious part is that Donald Trump is claiming he's been "exonerated" when even his own stooge William Barr just explicitly admitted the Mueller report does NOT "exonerate" Trump. This is so much worse for Trump than he's pretending right now. The fireworks start now.

Author and attorney Seth Abramson, who is knowing for his astoundingly long tweet threads about Trump and Russia, went on a 20-tweet thread last night, which included five postscripts and five additional notes to round it out. You don’t need to read any of it.

Brother Ed also pulled a shameless stunt, claiming “Special Counsel Refuses to Confirm That Barr’s Letter was Impartial or Adequate,” emailing Robert Mueller’s spokesperson to see if he would boldly announce the head of the DOJ was full of shit last night.

Peter Carr, the Special Counsel spokesmen, like he does on every email inquiry, declined to comment—which is a world away from “refuses to confirm” rampant bias in Barr’s letter to Congress.

Because Democrats control the House now—and because they’ve already committed to investigating Trump all the way up until the 2020 election—it’s likely we’ll wind up seeing Mueller’s full report. And what it includes is unknown to most everyone.

But to the people who have been hyping Trump Russia online for two years now, it won’t matter what is in it when it finally comes out. They’ll see what they want to believe.