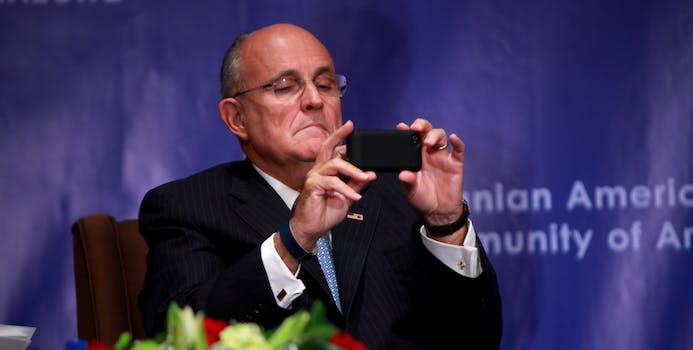 Giuliani will advise Trump on an 'ongoing basis' in matters of security and intrusion.

The group, which will be coordinated by Giuliani, will help “bring together corporate leaders and their technological people” to consult with Trump on an “ongoing basis,” Giuliani, who is CEO of an international security consulting firm, Giuliani Partners, said Thursday morning on Fox News.

In a statement, Trump’s transition team said the former New York mayor “will be sharing his expertise and insight as a trusted friend concerning private sector cybersecurity problems and emerging solutions developing in the private sector.”

“This is a rapidly evolving field both as to intrusions and solutions and it is critically important to get timely information from all sources,” the transition team said. “Mr. Giuliani was asked to initiate this process because of his long and very successful government career in law enforcement and his now sixteen years of work providing security solutions in the private sector.”

Giuliani’s name was floated last year as a possible nominee for secretary of state by Trump—that offer eventually went to Rex Tillerson, the chief executive of Exxon Mobil. The New York Times reported that Giuliani’s business ties overseas would have liked caused controversy during the confirmation process.

Questions over Giuliani’s international consulting work were raised last year, including money he received from a former U.S.-designated foreign terrorist organization, the Majahedin-e Khalq (MEK), a group of exiled Iranian dissidents formerly allied with Saddam Hussein. Giuliani, who gained national fame as New York City’s mayor during the Sept. 11, 2001, terrorist attacks, was paid to deliver a speech in Washington urging the State Department to remove MEK’s terrorist designation. (When the State Department did so in 2011, however, it denied the paid speeches of influential former U.S. officials played any part in the decision.)

A subsidiary of Giuliani Partners has done work for the government of Qatar, a U.S. ally. He also once consulted for a Las Vegas development company seeking to build a $3.5 billion casino resort in Singapore; one of the company’s outside partners was a controversial Hong Kong billionaire with ties to North Korea, a U.S.-designated terrorist state.

Last year, Giuliani served as head of cybersecurity at Greenberg Traurig, an international law firm whose partners and former attorneys have been investigated over the last decade for kickbacks, fraud, and insider trading.

During his campaign, Trump heavily criticized his Democratic opponent in the 2016 election, Hillary Clinton, for giving paid speeches to Wall Street banks—but Giuliani has done the same. In 2006, he reportedly made up to $10 million by giving over a 100 speeches around the world, most of them to oil companies and investment banks, including Lehman Brothers, JP Morgan Chase, and Merrill Lynch.