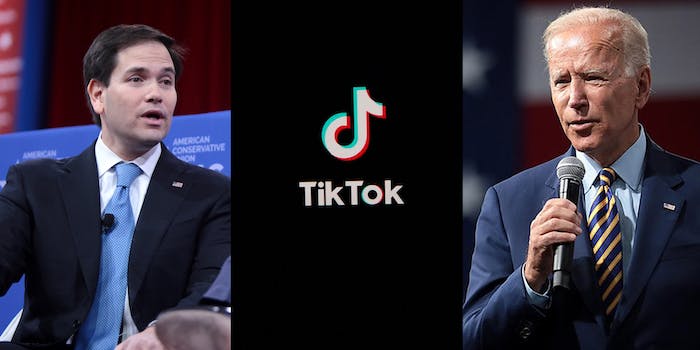 A lot of people are reminiscing about Trump's failed attempt to ban TikTok.

Rubio made his call to Biden after reports surfaced that China’s government took an ownership stake in a subsidiary of TikTok’s parent company, ByteDance.

The move does not directly affect TikTok, according to the Washington Post, but concerns have long been raised about the wildly popular app being controlled by a Chinese company.

“TikTok is led by an executive team in the U.S. and Singapore,” TikTok told Reuters. The spokesperson added that “the China-based subsidiary of ByteDance Ltd. referenced has no ownership of TikTok.”

Trump pushed for a ban of TikTok in the U.S. during his final year in office, resulting in a legal back-and-forth and sprawling ownership battle that ultimately resulted in Biden rescinding an executive order Trump signed that sought to ban TikTok.

The Florida senator once again ignited those concerns on Tuesday.

In a statement, Rubio said that TikTok “represented a serious threat to personal privacy and U.S. national security” and urged Biden to “take immediate action to remove ByteDance and TikTok from the equation.”

Rubio’s call had many people reminiscing—and joking—about Trump’s attempt to ban the app in the United States.

“Mr. President, I have had it up to *here* with these goddamn viral TikTok dances. The Republic cannot abide this Communist-exported terrorism any longer!” one Twitter user wrote.

“Yes, blocking TikTok is the most important issue going on today in our country …. #GOPDoesnt GiveAShit,” another user wrote.

But they were far from the only ones.