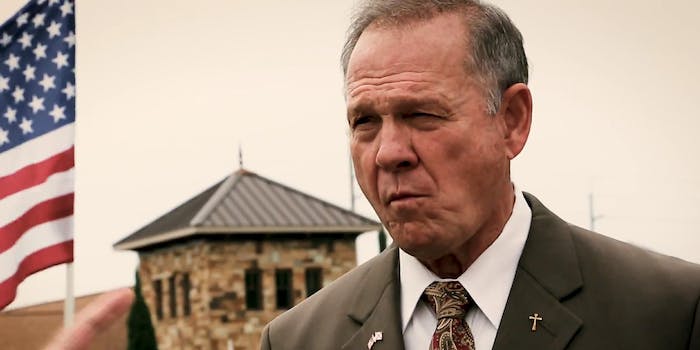 Kavanaugh is accused of sexually assaulting Dr. Christine Blasey Ford at a party while the two of them were in high school. The Supreme Court nominee has denied Ford’s claims, and there is a possibility a hearing will be held next week regarding the allegations.

Several women came forward and accused Moore of engaging in sexual misconduct with them when they were teenagers ahead of his election before losing to Democrat Doug Jones last year. Moore also denied the allegations.

Around the time of Moore’s defense, a viral post by a former student at Georgetown Prep–where both Kavanaugh and Ford attended—blasted Mark Judge, the friend Ford says was present during the alleged incident, calling him out for smearing victims of child abuse.

On Wednesday, Moore urged Republicans in Congress to “take a stand” and confirm Kavanaugh during an interview with One America News, adding that Democrats used sexual misconduct allegations as “tactics” against their political opponents.

“I think its reflective of what’s really happening—that these allegations come in the midst of a Senate confirmation for a position on the United States Supreme Court as they did in my case, just 32 days before the election,” Moore said. “I think they don’t care about its transparency, they just use it because it’s effective. They know that on the one hand, you offend women if you believe somebody that says they weren’t guilty of sexual misconduct. On the other hand, if don’t believe them, you’re condemning the person accused of guilt to prove his own innocence. It’s a Catch-22.”

Meanwhile, on Facebook, Eric Ruyak, a former Prep student, wrote it was “no surprise” Judge was involved in Ford’s allegations, adding that he defended a priest from the school that Ruyak said molested him.

“When I came forward with allegations regarding Gary Orr, a former priest, sexually assaulting me…Mark Judge (Kavanaugh’s friend in this who despicable story of sexual assault) reached out to alums saying that Gary Orr was a great priest and that I had obviously been corrupted by liberalism into a homosexual and therefore was most definitely lying,” Ruyak wrote.

Funny bit of full circle nonsense.For those of you who don't know, I went to Georgetown Prep, where both Kavanaugh and…

At the end of the post, Ruyak said “the story that this woman is telling is one that I know was repeated dozens of times in my 4 years at Prep,” but later clarified that he did not attend the high school at the same time as Ford or Kavanaugh. In the initial post, it was being interpreted that he was saying he’d heard Ford’s story.

He added that stories like Ford’s “were rampant at that high school – I was not referring to her story specifically.”