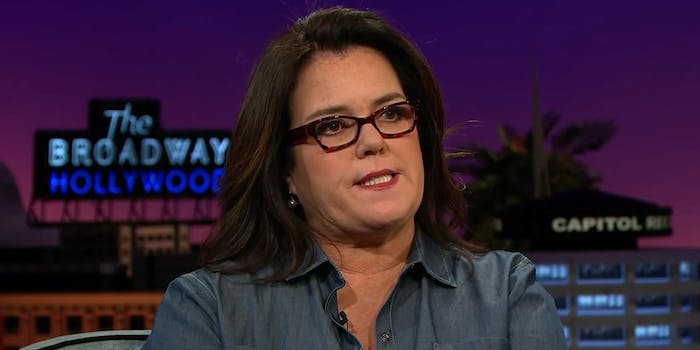 Rosie O’Donnell is apparently displeased with the algorithm employed by Twitter to recommend influential accounts.

Twitter recommended O’Donnell follow Donald Trump, the GOP presidential hopeful with whom she’s had beef for more than a decade. O’Donnell tweeted about the recommendation Thursday afternoon.

Over the years, Trump has repeatedly bad-mouthed O’Donnell publicly, typically attacking her appearance with words like “fat” and “slob.” During the primaries, Trump continued to berate O’Donnell, spouting several insults at her during campaign events.

Following his debate on Monday with former Secretary of State Hillary Clinton, Trump dredged up the old grudge, accusing O’Donnell of being “very vicious” to him while defending his crass remarks. “She deserves it and nobody feels sorry for her,” he said.

However, Twitter did not take into account the pair’s personal beef when recommending Trump to O’Donnell. Actually, tweeting a person’s name—regardless of whether the intention was to praise or insult them—will almost certainly trigger a recommendation, particular if the account is as influential as Trump’s. As Twitter’s website notes, its “suggestions are generated by algorithms, which means you may or may not know the accounts or find them relevant.”

It also possible O’Donnell and Trump have each other’s phone numbers, since Twitter also recommends following personal contacts. Or perhaps they were in close proximity to one another. It is equally possible that Trump paid Twitter to promote his account. There’s simply no way to know for sure.

Thankfully, though, when Twitter recommends following a person you have no interest in, there’s always the block button.