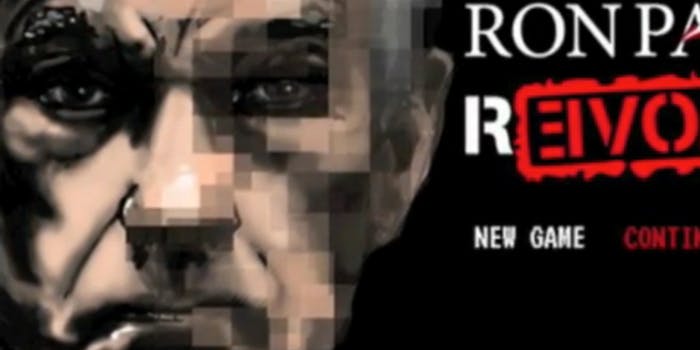 Daniel Williams promised his backers an original game, but he's been accused of merely lifting others' work.

Independent game developer Daniel Williams promised his Kickstarter backers a game “full of original artwork and gameplay mechanics.” Now, speculation is beginning to swirl that supporters of the 27-year-old’s Ron Paul: Road to REVOlution are getting anything but originality.

Jon Hendren of Something Awful has accused Williams of crafting the game as a carbon copy remake of a step-by-step game creation tutorial—available at melonjs.org—as well as lifting protagonist Ron Paul’s design from a Waluigi sprite sheet by designer No Body (No Body the Dragon). (No Body’s designs are available for public use, though the designer asks that users give credit on each piece of artwork they use.)

“The author is simply following a cookie-cutter tutorial on how to make a video game. In fact, it happens to be this one, which is a cool helpful article that includes all the necessary source code in very clear boxes that make it super easy to copy and paste.”

Williams responded to the allegations this morning, telling the Daily Dot that what he’s doing is nothing out of the ordinary.

“The guys at Something Awful had access to my entire source code – they could have easily seen the thousands of lines of code that I’ve written. They chose not to mention it.”

Williams was just as vigorous in his defense of the game’s design, writing that the screenshots used by Something Awful were taken out of context.

“The one screen shot clearly shows a completely *empty* file that’s not even included in the application,” he wrote. “The other screen shot shows a stock file that I edited, that came with the game engine I’m using.”

When he launched the project in early April, Williams wrote that the game play footage seen in the project’s video was in its alpha stage and that the art would get an overhaul after funding was complete.

“I’m not sure what the world thinks of programmers, but we’re not The Matrix,” Williams wrote. “None of us are born knowing every API ever written. The tutorial mentioned is specific to the game engine that I’m using. I tried several game engines before I decided on MelonJS, and I had to learn each of them in order to make that decision.

“The criticisms being made are about parts of the project that were never intended to be made public. Rough drafts are rough.”