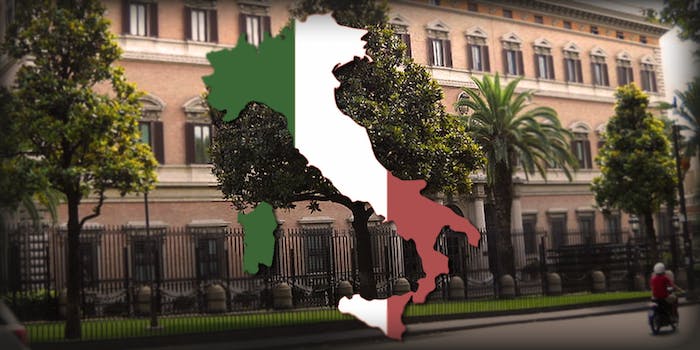 U.S. embassies in Italy are monitored by the NSA's Special Collection Service.

An article published Friday by one of Italy’s most prominent news magazines details the efforts of the United States to spy on Italian citizens and their government officials.

According to L’espresso, the Special Collection Service (SCS), a U.S. foreign intelligence unit, is engaged in espionage within the cities of Milan and Rome. The information was included in classified files handed over to the press by NSA whistleblower Edward Snowden.

The story was filed by Italian journalist Stefania Maurizi, in collaboration with Glenn Greenwald, the journalist primarily responsible for reporting on materials provided by Snowden.

The SCS was also the unit responsible for wiretapping the phone of German Chancellor Angela Merkel, the journalists reported. They are responsible for “monitoring the communications of the political, and likely economical, leaders of host nations,” according to L’espresso.

L’espresso reports that “the Special Collection Service is likely one of the most sensitive units in U.S. intelligence. The service deploys teams under diplomatic cover, operating in US embassies around the world to control friendly and enemy governments.” An NSA document refers to 80 active SCS sites as of 2010, only two of which are located in Italy.

It’s speculated that one SCS site in Germany is likely located on the rooftop of the U.S. embassy. “But what about Rome?” L’espresso asks.

A technical assessment requested by the magazine from journalist Duncan Campbell (of ECHELON fame) concluded it’s very likely the SCS has set up at the U.S. Embassy on Rome’s Via Veneto.

Campbell told L’espresso, “I have no doubt that the cubic white tent like structure marked by the arrows is a SIGINT concealment,” and described the uses of multiple antennas atop the embassy, likely used to monitor “government and police channels,” as well as for “targeted bugging” by the Central Intelligence Agency. Campbell said the spy equipment was “obvious” and noted that similar equipment can be seen on many embassies worldwide.

The NSA materials also provide insight into how the Italian embassy has been targeted in America. The U.S. engaged in two espionage operations, codenamed “Bruneau” and “Hemlock”, as described in a top secret Sept. 2010 report, which effectively extracted all data contained within the Italian embassy’s hard drives. In addition, “implants” were placed within the embassy, which may be a physical device (a bug), or exist in the form of uploaded surveillance software.

“NSA’s mass spying activities did not target our leadership and diplomacy alone, but it possibly also targeted millions of Italian citizens.” L’espresso added.

A file, defining a top secret program called “Boundless Informant”, which specifies Italy as a target, revealed that between December and January the metadata of over 45 million telephone calls had been collected by the NSA. Whether Italian intelligence services were complicit in the extraction of this data is unknown, notes L’espresso.

Enrico Letta, Italy’s prime minister, has previously denied aiding the NSA in any intelligence gathering operations targeting Italian citizens. Of course, “Enrico Letta has ruled out NSA espionage against the Italian government, diplomacy and citizens,” in the past, L’espresso notes. Thanks to Snowden’s revelations, we now know he may have ruled it out too soon.

Finally, L’espresso poses an important question, one that demands a response from U.S. leadership: “What does espionage against a friendly country have to do with the fight against al-Qaeda fundamentalism?”