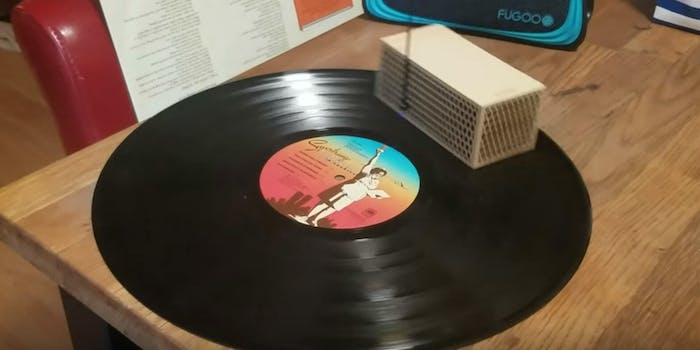 Everyone hates this scam of a Bluetooth record player

The Kickstarter project is drawing backlash from patrons.

A Kickstarter and Shark Tank success story has found its way back into the spotlight, but this time, for all the wrong reasons.

Redditors are having a field day dissing the “RokBlok,” a wireless record player after one user uploaded a video demonstrating its dismal audio quality. Warning, the grotesque noises in the below clip will keep you up at night.

As you can see (or hear), the rectangle whirling around in circles is wrecking Supertramp’s Breakfast in America vinyl record while doing similar destruction on every poor listener’s ears. It’s hard to make out what your eyes are looking at in the clip, but don’t be fooled, there’s nothing extraordinary about that flying piece of wood. It’s a battery-powered tonearm with Bluetooth. You just turn it on, place it on top of a record, pull up the lever, and let it go.

The RokBlok gained more than $350,000 from 3,600 backers during its Kickstarter campaign, which closed at the end of 2016. Its creator then went on Shark Tank where he made an unprecedented deal to sell 100 percent of the company for $500,000, a two-year salary, and per-unit royalties. The billionaire hosts were amazed by the gadget. Perhaps they would have been less amused if they’d done their research. These wireless record players have been around for decades now, often shaped as toy cars, like with the Record Runner or Soundwagon.

“I’m astonished that the Shark Tank guys actually bought into this. This looks like complete garbage. Who would buy one of these things?” one Redditor posted.

To its credit, the “infinitely portable” RokBlok adds Bluetooth functionality to your record player, allowing you to spin tracks through wireless speakers. That’s a handy feature for people who care less about audio quality and more about keeping with hipster trends. That is, if it works. Kickstarter comments seem to confirm the eerie video is indeed indicative of the gadget’s poor quality.

“The sound from the device is tinny, and the speed of the device whilst playing is not consistent,” one comment reads.

Another owner said, “The sound quality of my RokBlok is abysmal. The speaker is crackly and tinny, and I can barely hear it over the whine of the motor.  The speed that a fully-charged RokBlok travels fluctuates so much that the music that is played is unlistenable.”

But that doesn’t mean people won’t buy it. A handful of redditors still think there’s a budding market for this vinyl assassin.