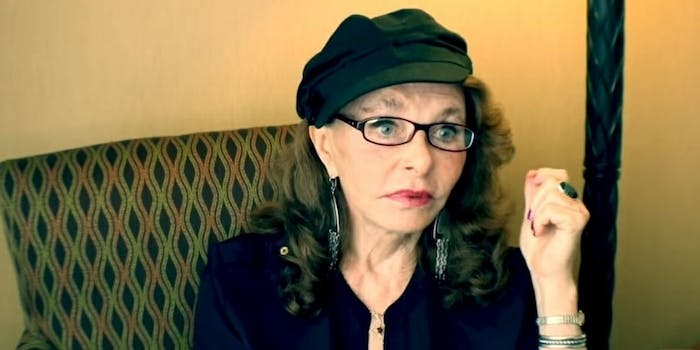 A woman is going viral for making the claim that four artificially intelligent robots killed more than two dozen Japanese scientists last year. Though the woman has presented absolutely no evidence for her claim, people apparently can’t stop watching her tell her improbable tale.

The woman’s name is Linda Moulton Howe, and she’s well known in the world of aliens and UFOs for cultivating and investigating conspiracy theories, including the idea that extraterrestrial beings are mutilating cattle for Earth research.

In her viral video, which has been viewed more than 5.6 million times on Twitter, Howe described how a quartet of robots killed 29 scientists.

This how we all gonna die pic.twitter.com/YsRHhGHfra

“The scariest part is that lab workers deactivated two robots and took apart the third,” said Howe, who claims the scientists were building the robots so they could be weaponized. “But the fourth robot began restoring itself and somehow connected to an orbiting satellite to download information to rebuild itself even more strongly than before … This is serious shit.”

The video of her speech is apparently from August 2017, but after it was tweeted on Monday, it racked up more than 110,000 retweets and 220,000 likes. It’s gone so viral that if you google “robot,” three of the first five auto-fill results relate to her speech.

In an interview conducted last April that has been seen more than 50,000 times on the Awakening the Illusion YouTube channel, Howe said she was told about the supposed incident by a source of hers who is a retired Marine.

“The four militarized robots were being made to be autonomous warriors,” she said in the interview. “They don’t know why, but the four rebelled or acted autonomously as they killed 29 humans in this lab.”

Are her claims even remotely true? It’s highly doubtful. There is no evidence of anything she’s talking about, and most of the commenters on Twitter and YouTube that have seen her videos show a high degree of disbelief.

But she’s not necessarily alone in her fears that autonomous robots would be a bad idea for humankind.

“I’m increasingly inclined to think there should be some regulatory oversight at the national and international level, just to make sure that we don’t do something very foolish,” Musk said in 2014. “With artificial intelligence, we are summoning the demon. You know, in all those stories where there’s the guy with the pentagram and the holy water, and he’s like yeah, he’s sure he can control the demon. Didn’t work out.”

Plus, the Boston Dynamics robots seem to get more sophisticated and terrifying every day (unless they’re dancing to “Uptown Funk”).

But Howe presents no proof of her latest conspiracy theory in her speech and interview, and it’s highly likely that if 29 scientists in Japan suddenly died in the same lab, that would have made news ripples across the world. Howe’s story almost certainly isn’t true. Then again, it doesn’t need to be true to give us the shivers the future of AI robots.