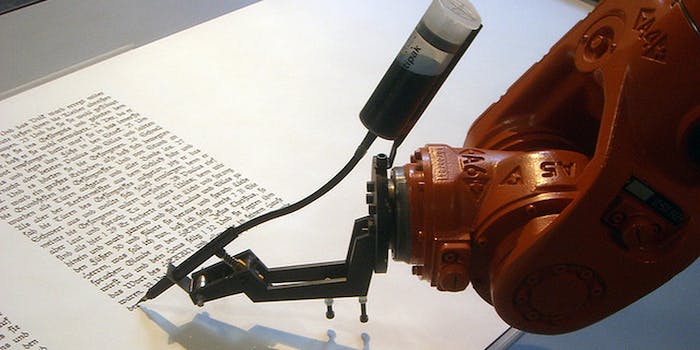 Robots with fancy handwriting will write your thank-you cards

A new upscale gift company's iOS app allows you to send handwritten greeting cards that you don’t even have to touch.

Penmanship enthusiasts have bemoaned the death of cursive for years. Blame technology! But here’s a new development: There’s an app that could bring back the art of fine handwriting while letting us humans stay as lazy as possible.

A new upscale gift company, Bond, released an iOS app that allows you to send handwritten greeting cards that you don’t even have to touch. A handwriting robot does all the work.

Though writing has existed for millennia and is often the first skill taught in school, it’s only recently that humans have been able to teach robots to do the same thing. As Ars Technica points out, it’s much more difficult than asking a machine to write printed characters. Mimicking intimate cursive letters requires subtleties in pen pressure, hand movement, and ink spotting that are hard to reproduce.

Obviously, robot-written cards, like many other robot-executed tasks, are still primarily a luxury for those with extra money to burn. It costs $5 to send a single gold-embossed card with up to a 255-character message, sealed with wax.

This is not the first time app developers have tried to get in on the greeting-card business. For two years, Apple offered a Cards app that let users send printed thank-you cards to users for $3 apiece. But this app was discontinued last month.

Bond Gifts is currently only available on iOS, but the company plans to release a version for Android and the Web in the near future.