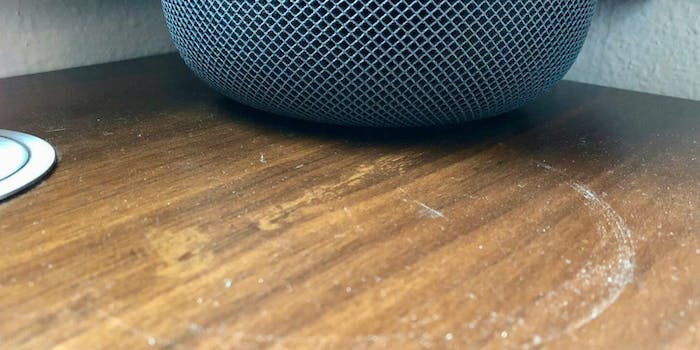 The company says the marks should go away after several days.

Make sure you put a coaster down before placing your new Apple HomePod on a wooden surface. In what is being called #ringgate, a number of Apple customers are reporting the Siri-enabled smart speaker causes unsightly marks when placed on treated wood.

Pocket-Lint reports that while reviewing the device, it noticed discolored rings starting to form on a “solid oak kitchen worktop treated with Danish oil.”

Wirecutter similarly found white rings on an oiled butcher-block countertop and a wooden side table. A Sonos One speaker it tested didn’t cause any damage to the same surfaces. Interestingly, the Space Grey HomePod is just as likely to produce rings as the white model.

Apple confirmed the issue in a statement to Wirecutter and all but admitted to knowing about it before reports started surfacing, “the marks can improve over several days after the speaker is removed from the wood surface,” a spokesperson said.

The company also released what might be the only “how to clean your smart speaker” support page in existence (because you shouldn’t need instructions for that). In it, the company says it’s “not unusual for any speaker with a vibration-dampening silicon base to leave mild marks when placed on some wooden surfaces.”

It says the marks are caused by oils diffusing between the silicon and surface. If they don’t go away on their own, wiping them with a damp or dry cloth should do the trick. If you’re still having issues, Apple advises you follow the furniture’s recommended cleaning processor or put your speaker somewhere else.

The rest of the document is common sense. Don’t use ammonia, abrasives, window cleaners, etc. to clean the HomePod and don’t place the power cord where it can be stepped on.

This latest incident is particularly embarrassing for Apple and not just because it comes weeks after the battery throttling fiasco. The HomePod has reportedly been in development for six years and was even delayed beyond its original release date. It’s no surprise then that the company is getting thrashed on social media.