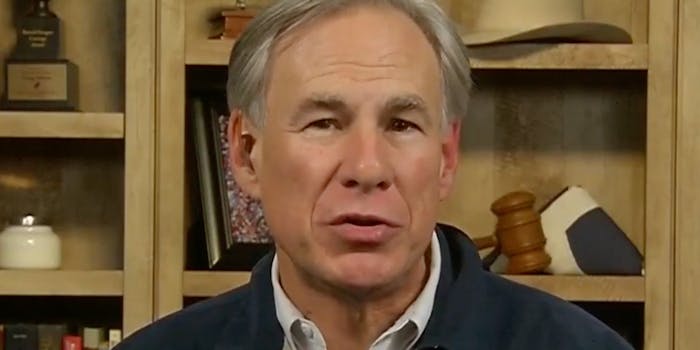 Texas conservatives are desperate to blame wind power for blackouts

Amid the broad failure of the power grid covering the bulk of Texas, right-wingers keep blaming statewide blackouts on wind and solar power, shifting away from their own destructive policies.

In Texas, which was hit with an unprecedented winter storm this week, news of frozen wind turbines prompted many conservative politicians to nonsensically claim the blackouts indicated the state had put too much stock in its renewable energy efforts. However, according to Texas Tribune, “the lost wind power makes up only a fraction of the reduction in power-generating capacity that has brought outages to millions of Texans across the state during a major winter storm.”

Per the report, an official from the Electric Reliability Council of Texas (ERCOT) said that 16 gigawatts of renewable energy generation were offline for reasons related to the winter storm, mostly from wind generation. Additionally, the state lost 30 gigawatts from thermal sources, including coal, gas, and nuclear stores.

Michael Webber, an energy resources professor at the University of Texas at Austin, told the Texas Tribune that while all of the energy sources share culpability, natural gas is delivering much less power than usual.

Dan Woodfin, a senior director at ERCOT, which controls the affected power grid, boosted that sentiment on Tuesday: “It appears that a lot of the generation that has gone offline today has been primarily due to issues on the natural gas system.

But conservatives like Rep. Dan Crenshaw (R-Texas), are continuing to pump non-truths by overhyping wind power’s losses in relation to other sources and broad infrastructural failures in the blackouts.

Said Crenshaw: “Bottom line: Thank God for baseload energy made up of fossil fuels. Had our grid been more reliant on the wind turbines that froze, the outages would have been much worse. This raises serious concerns about the reliability of renewable-reliant power grids during extreme weather.”

Governor Greg Abbott (R) trotted out the same distortions on Fox News, claiming the vaunted, progressive-supported Green New Deal “would be a deadly deal for the United States of America.”

But the truth is diffferent. Ryan Cooper, a reporter with the Week, shared a graphic from an Ars Technica report that said, “The narrative that iced up wind turbines are behind the Texas blackout is total bullshit. In fact wind was overproducing estimates yesterday.”

“Since wind in Texas generally tends to produce less during winter, there’s no way that the grid operators would have planned for getting 30GW from wind generation,” wrote John Timmer of Ars Technica. “In fact, a chart at ERCOT indicates that wind is producing significantly more than forecast.”

Texas conservatives appear to be more worried about attacking progressive ideas and initiatives than fixing the state’s overreliance on an unprepared grid, which has led to deaths via the blackouts.