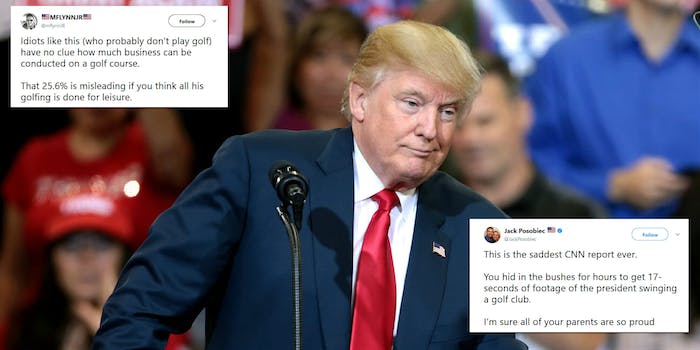 On Christmas, President Donald Trump said he would get “back to work” after the holiday to “Make America Great Again.” However, as CNN showed in a video posted on Tuesday night, Trump apparently views work as golfing.

The Associated Press reported that Trump played a round of golf with pro golfer Bryson DeChambeau, former Senior PGA player Dana Quigley, and Sen. David Perdue (R-Ga.) on Tuesday, despite his claim that it was time to get “back to work.”

I hope everyone is having a great Christmas, then tomorrow it’s back to work in order to Make America Great Again (which is happening faster than anyone anticipated)!

However, far-right defenders of the president went apoplectic after CNN published an “exclusive” video of Trump golfing on Tuesday, outfitted in a red “USA” hat, a white shirt, and black pants.

Trump’s most ardent supporters seemed to take issue with the cameras capturing Trump playing golf on a day he claimed would be a time to get back to making “America great again,” with some even arguing that golfing is actually a way to get work done.

The staunch defense of Trump golfing is a bit hypocritical considering the right routinely bashed former President Barack Obama for golfing while he was president.

The Gateway Pundit, an unabashed right-wing website, went all-in on bashing CNN, calling the news outlet “Creep News Network” in their story about the video and defended Trump for taking a “well deserved break from the Swamp.”

Meanwhile, Michael Flynn Jr.—the son of former National Security Adviser Michael Flynn, who recently pled guilty to lying to the FBI as part of the ongoing probe into Russian interference in the 2016 election—defended the president for his golf outing by replying to a tweet that pointed out Trump has spent 85 days of his presidency golfing.

According to Flynn Jr., Trump is using the time on the links to get things done.

“Idiots like this (who probably don’t play golf) have no clue how much business can be conducted on a golf course,” Flynn Jr. wrote, adding that the determination that 25.6 percent of Trump’s presidency being spent on a golf course was “misleading.”

Per pool report, Trump is golfing today in Florida. His 85th day golfing and 111th at a Trump property since becoming president.

33.5% of his days as president have been at Trump properties

Jack Posobiec, a far-right media personality, said that CNN’s video was the “saddest” report from the news outlet “ever.”

“You hid in the bushes for hours to get 17-seconds of footage of the president swinging a golf club,” Posobiec wrote, sharing CNN’s video. “I’m sure all of your parents are so proud.”

The response was similar on r/The_Donald, a notorious pro-Trump subreddit known for its steadfast defense of the president (among other, less flattering things).

In a thread linking to the Gateway Pundit’s “Creep News Network” post, several Trump supporting Redditors seemed concerned with how close CNN was able to get to the president.

“Actually this is kind of scary,” a Redditor named Grandebabo wrote. “To think that the media can get this close to the president undetected without the Secret Service knowing, this is a problem.

Others were also concerned with CNN’s tactics.

“CNN doing papparazzi [sic] shit now. What’s next, hiding under the bed to see how he fucks Melania?” wrote maga_nrg_man.

And of course, the run-of-the-mill right-wingers on Twitter chimed in—with one Twitter user suggesting CNN be “prosecuted” for filming the president hitting the links.

This morning, Trump left Mar-a-Lago to head to his golf course for the 86th time in just under a year.