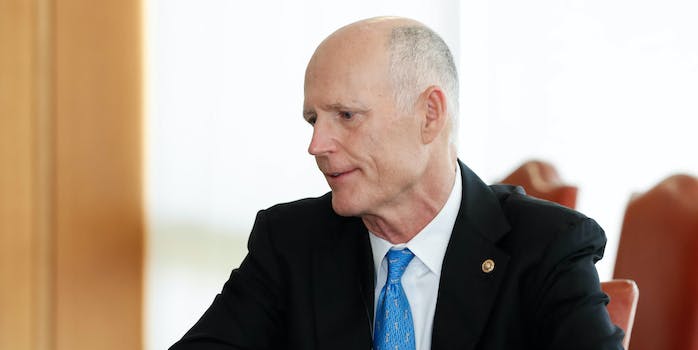 'Nice to meet you, kettle.'

This morning, Sen. Rick Scott (R-Fla.) shared his thoughts about it.

“I’m sickened to hear reports that nursing homes are stealing stimulus checks from seniors,” Scott tweeted. “It’s disgusting that anyone would EVER take from our most vulnerable, especially during a crisis. They must be held accountable to the full extent of the law.”

While that seems like a nice sentiment, it’s coming from the wrong messenger.

Because people were quick to point out that Florida’s junior senator knows a thing or two about defrauding vulnerable people.

In the 1990s, Scott’s for-profit healthcare company was at the center of one of the largest Medicare and Medicaid fraud cases in history.

Scott resigned his post as chief executive in the midst of the scandal. Several of the company’s subsidiaries pled guilty to criminal conduct, Florida Politics reports, and the company later agreed to pay $1.7 billion in fines, penalties and damages.

Scott has claimed he was ignorant of the fraud, and also that he took responsibility. Nevertheless, the fraud case has followed him throughout his political career—although it hasn’t kept him from winning three consecutive elections.

It was little surprise that Scott’s claim to be sickened by vulnerable people being defrauded did not go over. Many called him a hypocrite.

“Now do the healthcare CEO who stole billions from a government program set up to help the most vulnerable in this country,” snarked one. “What was his name again? Any idea Rick? What? U plead the 5th?” (Scott infamously invoked the Fifth Amendment’s privilege against self-incrimination 75 times during a deposition in one of the numerous civil suits over the fraud.)

Nursing homes in several states have reportedly tried to convince residents to sign over their stimulus checks in violation of law. It is not clear if Florida is one of them.