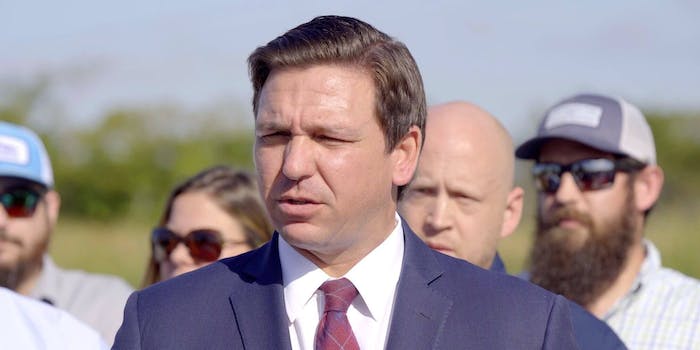 People are getting desperate.

The coronavirus pandemic has led an astonishing 22 million Americans to file for unemployment in the past month—with more than 5 million claims in just the last week.

Thousands of people trying to claim benefits in Florida, however, have been unable to due to the state’s faulty unemployment website.

Earlier this month, the Daily Dot reported on the state of the Florida Department of Economic Opportunity (DEO) website and how it was designed to fail by the state’s last governor, now Sen. Rick Scott (R.-Fla.).

DeSantis may have inherited the faulty site, but he isn’t entirely blameless. State auditors warned DeSantis about its problems a year ago.

Scott, whose credo was “jobs, jobs, jobs,” was notoriously stingy about unemployment and other social safety nets.

Now that miserliness is coming back to haunt Florida.

Criticisms have mounted since the coronavirus created a wave of unemployment and exposed the trainwreck of a system. Many have spent much of the last month trying and failing to file a claim. This reportedly stems from defects with the personal identification number (PIN) verification system.

It also doesn’t help that DEO was nowhere near staffed well enough to handle the unprecedented onslaught of calls and claims. People complain of spending hours on hold, just to get hung up on. Some say they’ve sent dozens of emails that have gone unanswered.

Their desperation and rage is gut-wrenching.

Meanwhile, the state has thrown $119 million at the problem with limited success.

This morning, Associated Press reporter Tamara Lush, whose husband has been trying to claim unemployment, tweeted that the website is now down for maintenance 13 hours a day—from 8 p.m. to 9 a.m.

Others noted the outage as well, although some received messages that the site was only down 11 hours a day.

In an attempt to bypass the defective system, Florida has begun accepting paper applications, but this too is fraught with issues.

People don’t know if their claim has been received, how long it will take to process, and whether the form they used—the state has made multiple revisions—will be accepted.

That hasn’t stopped their trying. Hundreds showed up to obtain paper forms at a recent event in South Florida.

The sheer volume of people claiming unemployment is staggering.

As of a week ago, 472,000 Floridians applied for unemployment since social distancing began. The state hasn’t provided an updated figure.

The real number is undoubtedly much higher. No one knows how many have tried and failed to apply, as the state is refusing to answer most questions about the unemployment office.

When the state does answer questions, it largely avoids specifics.

“While we cannot comment on an individual’s claim due to privacy concerns, I can tell you that pending status means a determination on an initial claim has not been made,” a DEO spokeswoman told an NBC affiliate in Orlando.

“With the added help from state agencies, specifically the extra help from the Department of Revenue, more claimants should be able to see pending status removed and eligibility determinations made.” they noted.

Even more frustrating, to access the maximum $600/week in federal unemployment benefits under the coronavirus stimulus act, Floridians must file their claim with the state.