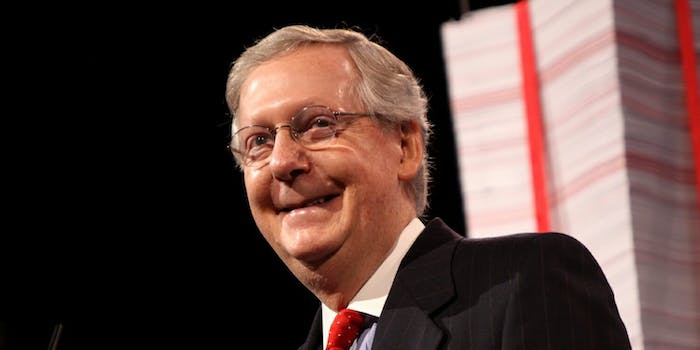 As November’s congressional election looms, Republican senators are calling for a swift confirmation process for President Donald Trump’s Supreme Court nominee Brett Kavanaugh in the hope of putting him on the bench by the time the next court session begins in October.

Democrats, on the other hand have consistently argued that the electorate should have their say in the November midterms before a decision is made.

Whose argument do you think is winning?

On Tuesday, Republican party heavyweights voiced their support for Kavanaugh and called for a swift confirmation process.

Judge Brett Kavanaugh has impeccable credentials & a strong record of upholding the Constitution. He is widely respected as a fair, independent & mainstream judge. I look forward to the Senate moving forward with a fair & thorough confirmation process. https://t.co/5Y5oWo36RB

Senate Democrats, sadly, will try to demagogue this nomination, but they will not be successful. I am confident that the Senate will take up his nomination quickly & I expect that he will be confirmed before the first Monday in October, the beginning of the Supreme Court’s Term.

Senate Majority Leader Mitch McConnell (R-Ky.), who described Kavanaugh as a “superb” pick, called on Democrat senators to “put partisanship aside and consider his legal qualifications with the fairness, respect, and seriousness that a Supreme Court nomination ought to command.”

Ironically, though, the same Republican lawmakers calling for a swift confirmation pledged to do anything they could to keep President Barack Obama’s Supreme Court justice nomination, Merrick Garland, from getting a hearing in 2016, arguing that the decision should be left to the next president.

Garland’s nomination came in March, nine months before an election. Kavanaugh’s is in July, only five months out.

Cruz came out against any rush to confirm a justice back in 2016, saying there was no problem with a court taking up its docket without a full compliment of justices.

“There is certainly long historical precedent for a Supreme Court with fewer justices,” he said.

In 2016, McConnell similarly thought an election should play out first before a vote.

The political maneuvering left the Supreme Court one justice short, and now looks hollow given the current rush to fill the slot.

Democrats now are trying the same messaging Republicans used in 2016, but it’s not getting heard at all by anyone on the Republican side of the aisle.

Even though they were the first ones to say it.