Multiple states have announced that they will refuse to admit Syrian refugees, citing fears sparked by Friday night’s deadly attacks in Paris.

Louisiana Gov. Bobby Jindal, a 2016 Republican presidential candidate, joined Govs. Greg Abbott of Texas, Rick Snyder of Michigan, and Asa Hutchinson of Arkansas in refusing to admit any of the tens of thousands of Syrian refugees who are expected to arrive on U.S. soil over the next year.

I will not stand complicit to a policy that places the citizens of Alabama in harm’s way. We refuse Syrian refugees. https://t.co/HTpflJUiPc

As Governor I will oppose Syrian refugees being relocated to Arkansas.

I just signed an Executive Order instructing state agencies to take all available steps to stop the relocation of Syrian refugees to LA.

Massachusetts Gov. Charlie Baker signaled that his administration would also refuse to admit Syrian refugees, though he has not yet made a decision, according to the Boston Globe.

#Breaking: “I would say no as of right now," Baker says of accepting refugees from Syria https://t.co/WSjJfh4sXD pic.twitter.com/b7zgctafGm

Boston Mayor Marty Walsh pushed back against Baker’s tentative decision, and he added that the city would “take steps” to protect Boston residents if the state does accept refugees.

“As a city and as a country it is not our custom to turn our backs on people who are in need and who are innocent,” Walsh said in a statement released Monday afternoon. “We have yet to receive guidelines from the federal or state government on how they will move forward, however should we be told that Boston is accepting refugees, we will work with our partners at the federal, state and local levels to ensure the safety of Boston residents.”

The growing list of governors—a majority of whom are Republican—lack the legal authority to stop the federal government from accepting and paying to settle refugees, meaning their stances on this issue are largely political.

The Paris attacks claimed the lives of an estimated 129 people. In response to ISIS claiming responsibility for the mass killings on Saturday, French warplanes bombed an ISIS compound in Raqqa, Syria, on Sunday.

One of the eight men suspected of carrying out the attacks was found with a falsified Syrian passport next to his body, CNN reported, citing an unnamed French senator. The man, whose fake passport reportedly identified him as 25-year-old Ahmad al Muhammad, was allowed to enter Greece earlier this year as a refugee, the senator told CNN.

In a letter to President Barack Obama, Abbott said that his reasons for blocking refugee resettlement in Texas were “plentiful.”

The letter cited FBI Director James Comey, who testified before Congress in October that the Federal Bureau of Investigation lacked the data it needed perform background checks on incoming refugees.

“We can query our database until the cows come home, but there will be nothing show up because we have no record of them,” Comey said.

Abbott said he was also concerned about what he called the “very real” threat of an ISIS attack in Texas, citing an attack by “two terrorist gunmen” on Garland, Texas, in May, for which ISIS claimed responsibility, as well as a number of suspected ISIS sympathizers arrested in the state since 2014.

“Given the tragic attack in Paris and the threats we have already seen in Texas, coupled with the FBI director’s acknowledgement that we do not have the information necessary to effectively vet Syrian nationals,” Abbott wrote, “Texas cannot participate in any program that will result in Syrian refugees—any one of whom could be connected to terrorism—being resettled in Texas.” 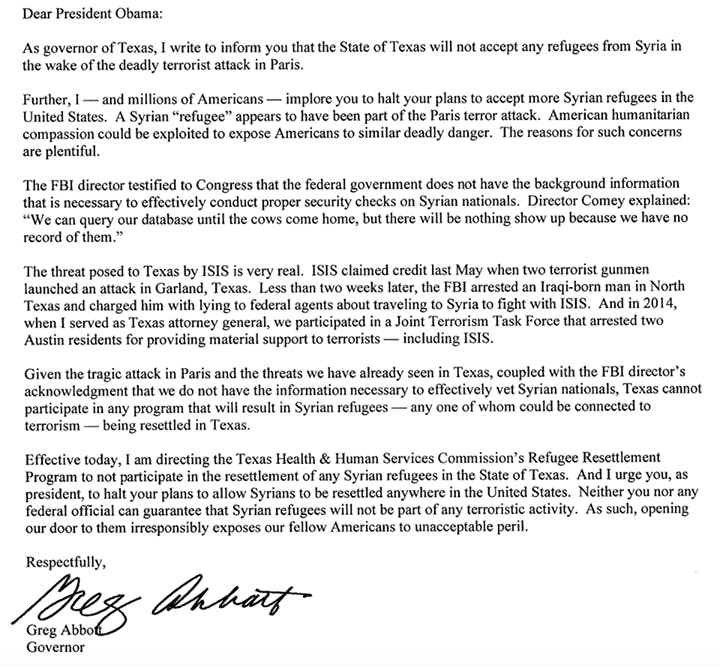 Alabama Gov. Robert Bentley laid down a similar line in the sand, saying that he “will not place Alabamians at even the slightest, possible risk of an attack on our people.” Snyder said that while Michigan was a “welcoming state,” his administration’s “first priority is protecting the safety of our residents.”

Following the attacks on Friday night, Jeb Bush, a 2016 GOP presidential candidate and former Florida governor, said that the United States should “focus our efforts” on rescuing Christian refugees, not Muslims. At a G20 news conference on Monday, Obama condemned Bush’s statements, calling the idea of a religious qualifier un-American.

“That’s not American. That’s not who we are,” Obama said at the news conference in Turkey. “We don’t have religious tests to our compassion.”

Obama has said that his administration plans to accept at least 10,000 Syrian refugees into the United States. Secretary of State John Kerry said on Sept. 20 that he expected the U.S. to allow more than 85,000 refugees from around the world in 2016, with that number potentially rising to 100,000 by 2017.

Update 1:18pm CT, Nov. 16: Florida, Indiana, and Illinois have joined the list of states that plan to refuse Syrian refugees.

Correction: Pennsylvania’s governor says that his state will not turn away refugees. And Asa Hutchinson is the governor of Arkansas.

Photo via thecrazyfilmgirl/Flickr (CC by 2.0) | Remix by Max Fleishman