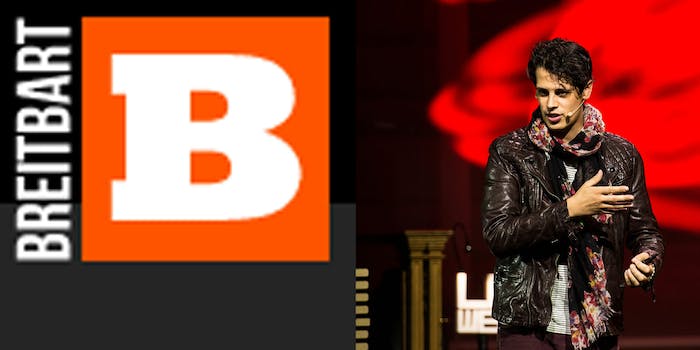 Breitbart courted members of the so-called “alt-right” to help propel their views from obscure havens for extremists to a more well-known website, according to a cache of emails obtained by BuzzFeed News.

The emails show that former Breitbart editor Milo Yiannopoulos, a far-right provocateur, worked with white nationalists and members of the media to feed the website’s provocative content and cozied up with several well-known white supremacists and members of the alt-right, a loose-knit group known for championing bigoted, pro-white views.

During his time at Breitbart, Yiannopoulos frequently chatted with people who helped build The Daily Stormer, a white nationalist hub, and other prominent groups and websites that promote an ethnostate in an effort to write a story that defined the alt-right.

As Yiannopoulos rose in fame among the fringes of the American politics amid his speaking tour, he received emails from people who “despised liberals,” wanted him to “keep triggering the special snowflakes,” and who praised his “Blue Lives Matter” Facebook posts–among other things, the website reports.

Soon, however, “undercover” supporters of then-candidate Donald Trump began reaching out to Yiannopoulos from the media, film, and academic industries.

One woman, who worked for E!, said the company was “contributor to the fake news machine and my colleagues have become insufferable. … I … offer you my services … a partner in fighting globalism,” according to BuzzFeed News.

You can read all of BuzzFeed News’ report here.