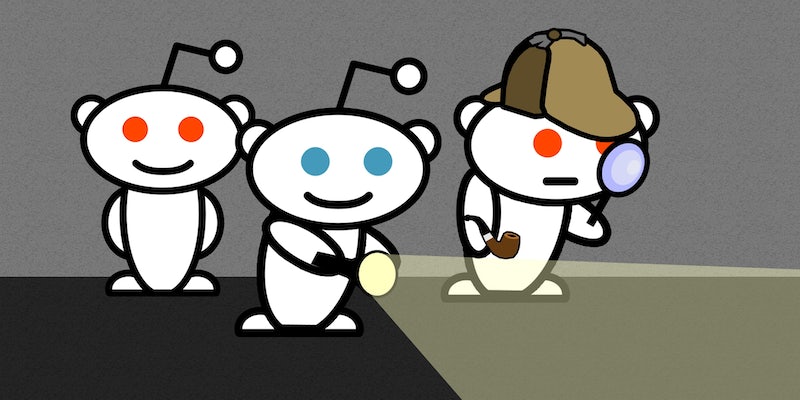 The Reddit sleuths who brought down a meme empire

The Miltz brothers were an American success story in the making. Too bad their meme empire was built on deception.

In June 2011, the biggest meme-generating forum on the Internet held elections. The community’s moderators had become overwhelmed with its runaway popularity. Reddit’s r/AdviceAnimals needed help.

They got it in the form of redditor gtw08, the eventual winner.

Looking back, all the moderators remember thinking about gtw08 was that he was quiet. They’d barely ever communicated with him, and they certainly didn’t know his real name. His history on Reddit amounted to little more than link submissions to a relatively new site called Quickmeme, where users type bold-faced captions on popular memes like Scumbag Steve and Success Kid.


These are known as image macros. They’re the bread and butter of r/AdviceAnimals, a community that would soon grow to more than 2.5 million users and dominate a certain part of Web culture, proliferating memes that bled into mainstream culture, from Ridiculously Photogenic Guy to Grumpy Cat.

And all along, gtw08 sat on the moderator rolls, holding immense power over which links survived and died in the subreddit.

This is the story how three redditors eventually brought him down, along with the biggest image macro site in the world.

The Miltz brothers were an American success story in the making. Stephen and Wayne, both University of North Carolina graduates, launched Miltz Media in 2007, and soon marched out a portfolio of 15 websites that were bringing in millions of visitors every month. But Quickmeme was their crown jewel. 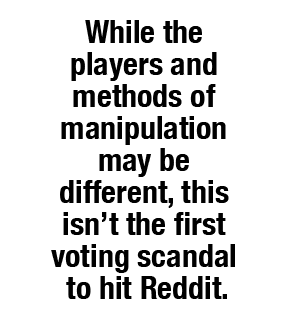 Launched in July 2010, their meme-making site was soon seeing massive traffic. It simplified what had traditionally been a laborious process for one of the Internet’s favorite pastimes: putting funny captions on popular images. By the summer of 2012, Quickmeme was seeing 70 million unique visitors and a half-billion pageviews, according to Wayne Miltz.

In April of this year, Quickmeme was the third-most submitted domain on Reddit, with more than 1 million posts. Only the photo-sharing site Imgur and YouTube had more posts, with 8.9 million and 3.6 million, respectively. The second-most popular meme-related domain, Memegenerator had only been submitted 10 percent as many times as Quickmeme.

Quickmeme was now netting the brothers around $1.6 million a month, according to independent analytics site Worth Of Web. The traffic came largely thanks to referral traffic from Reddit’s homepage—the self proclaimed “front page” of the Internet, which collects more than 71 million monthly visitors. Quickmeme was a fundamental part of the Reddit ecosystem.

In April 2012, a new competitor emerged in the meme-making landscape. Livememe looked like an outright Quickmeme clone, except for two crucial differences: It supported GIF animations and special effects. 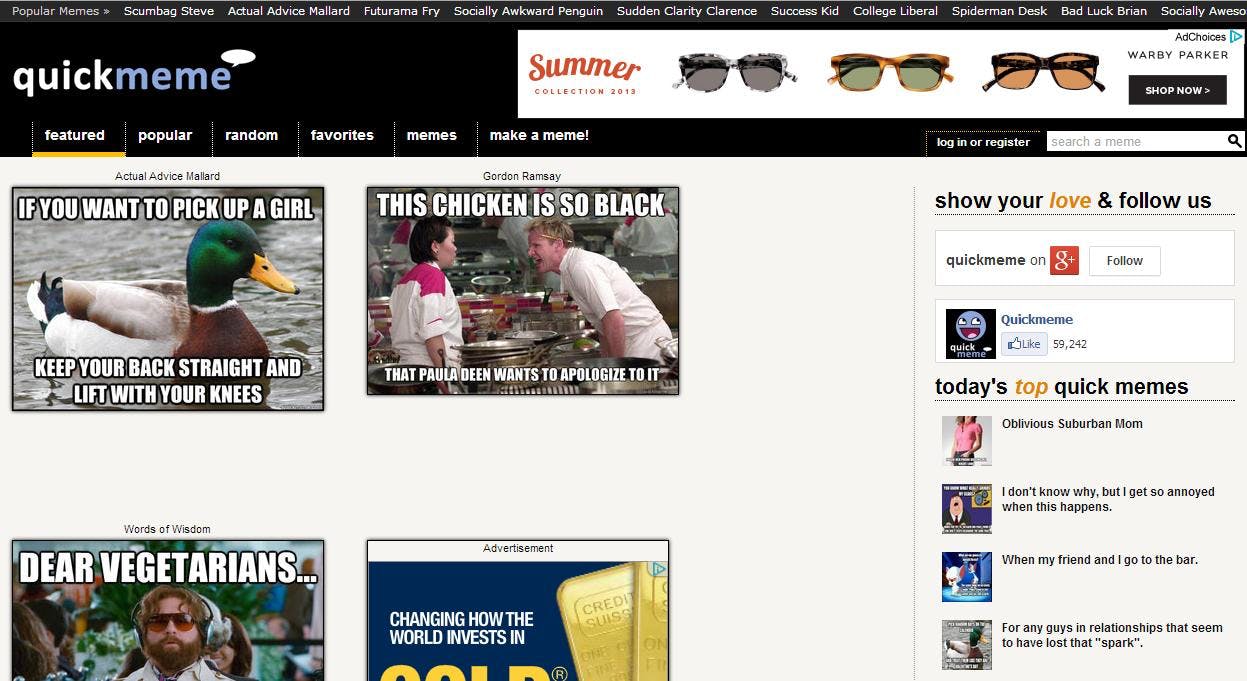 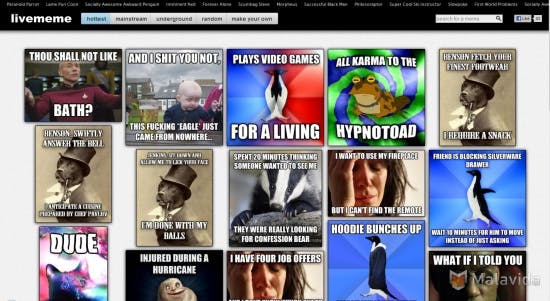 The Miltz brothers had reason to be angry. Livememe looked like a carbon copy of Quickmeme.

Users were pretty excited about the site, thanks in part to those extra features, and r/AdviceAnimals moderator ManWithoutModem soon noticed Livememe links trickling. Then something odd happened. As soon as these links began to collect upvotes, fellow gtw08 would delete them. He told the other members of the mod team that Livememe links were “redirecting people to their homepage or to advertisements” instead of the image.

“I sort of took his word for it as I hadn’t been doing much redditing at the time and was busy with other things in life,” ManWithoutModem told the Daily Dot.

The pattern continued for weeks. Redditors began to complain to the moderators about the deletions. ManWithoutModem didn’t make much of it, however, because, he explained frankly, redditors are always complaining about this kind of thing.

Then Livememe’s owner requested a placement on AdviceAnimals’s sidebar alongside Quickmeme and Memegenerator—basically, free advertising to the subreddit’s millions of users. 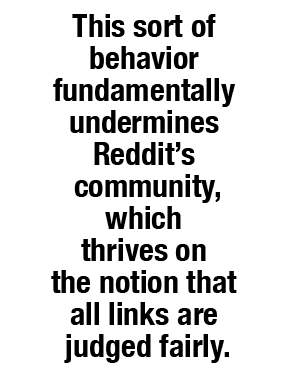 Gtwo08 replied immediately: “No, your website directs users to pages full of ads,” he said, according to ManWithoutModem.

This was strange, ManWithoutModem thought, because he’d still seen no evidence this was true. On his own initiative, he started digging into gtw08’s submission and moderating patterns. The moderator, who’d stayed quiet ever since winning that election in 2011, had never removed a Quickmeme post. But he went out of his way to remove popular Livememe links, including those that had reached the front page.

ManWithoutModem suspected the fellow mod had some kind of paid relationship with Quickmeme. He made the unilateral decision to kick gtw08 off the team on March 24, nearly a year after he began his investigation. But two days later, a higher ranking AdviceAnimals moderator reinstated him.

“[He] said I had no evidence and that I was a conspiracy theorist and that gtw08 had nothing to do with Quickmeme,” ManWithoutModem said.

“He told me I was ‘off the gtw08 case’ and that if he found me looking into it again, he would remove me as a moderator from /r/AdviceAnimals. So I kind of just said ‘screw it,’ and forgot about it for a while.”

Aware that other AdviceAnimals moderators were watching him closely, gtw08 began covering his tracks. He’d remove an unpopular Quickmeme post here and there, some Imgur posts, and then a popular Livememe link.

But at the same time, gtw08 was also hashing out conspiracy theories about Livememe to the other mods. The site was using bots to get its posts voted up to the frontpage, gtw08 claimed. And in a bid to get Livememe banned, he compiled data of this alleged botting scheme. The moderators didn’t see enough evidence, however, and voted against the ban.

While ManWithoutModem was taking a break from looking into gtw08, another moderator had begun a separate investigation. Mod jokes_on_you was certain the real perpetrator of voting fraud on Reddit was actually Quickmeme. In May, he messaged ManWithoutModem with evidence that the site was using bots to upvote its own links and downvote those of its competitors. He had proof this happened on at least 14 occasions.

Was there a connection between gtw08 and Quickmeme? The two moderators made a private subreddit where they collected evidence.

They discovered that on weekday mornings, which is Reddit’s most active period, nearly every Quickmeme post submitted collected no less than six upvotes almost instantaneously. Posts from Livememe and Imgur would get that same amount of downvotes.

“The first few votes on a submission are crucial,”  jokes_on_you said, explaining that a few downvotes will sink a submission almost immediately, while a few upvotes at least gives it a shot at the front page. 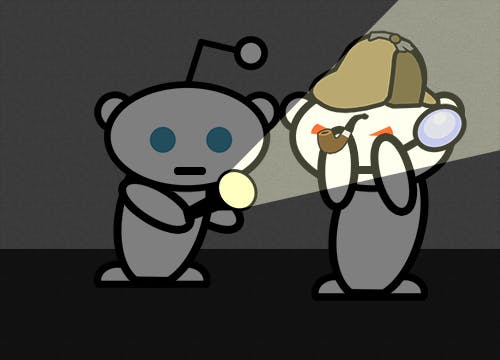 While jokes_on_you compiled posts to support his theory, ManWithoutModem and redditor Yourfriendshateyou began piecing together the connection between Quickmeme and gtw08. The two combed through gtw08’s Reddit history and looked up IP addresses—a computer’s unique identifier on the Internet—to see if they could find any relationship. Using the Wayback Machine, a time capsule that archives old versions of websites, ManWithoutModem discovered that gtw08’s old Reddit submissions, which he had deleted, were all on domains owned by Wayne Miltz of Nightingale, N.C.

Then they found the smoking gun connecting gtw08 and Quickmeme.

In the moderators’ IRC chatroom one day, gtw08 had forgotten to change his username. He appeared as “TWayne” instead. Wayne Miltz, it turned out, prefers to go by his middle name. His full name’s Timothy Wayne Miltz. The chatroom IP address also tracked back to North Carolina, where Quickmeme is headquartered.

TWayne, North Carolina, the weird obsession with Livememe, the obvious and bizarre voting patterns. All the evidence was there.

“You brought this upon yourself,” ManWithoutModem said about Miltz. “You already had a popular website, but you were just afraid of having some actual competition. So you did all you could in your power to stomp it out.”

While the players and methods of manipulation may be different, this isn’t the first voting scandal to hit Reddit. As one of the top 50 most visited sites in the world, Reddit’s front page directs a millions of readers and, as a result, serious advertising money to any site luckily enough to reach it.

And as with any pot of gold, the search for front-page traffic has led people do some crazy tactics—including buying upvotes, paying off powerful moderators, and even tasking employees with embedding themselves within Reddit.

In April 2012, the Daily Dot, working off tips from redditors, revealed that Jared Keller, then the associate editor and social media editor at the Atlantic, had been spamming Reddit daily to drive huge amounts of traffic to the site. Keller was so proficient at gaming Reddit’s algorithm that he collected 176,000 link karma and, at one time, ranked in the top 30 among all users on the site. Keller’s account was banned. The entire Atlantic domain also received a temporary ban.

This sort of behavior fundamentally undermines Reddit’s community, which thrives on the notion that all links are judged fairly. It’s a democratic system, one that depends on digital gumshoe detectives like ManWithoutModem and jokes_on_you to police its subreddits.

While Keller and the Atlantic took their punishment in stride, Quickmeme and Miltz have not. 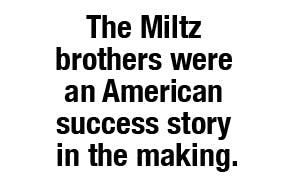 Since Saturday, Miltz has denied all charges and instead engaged in a smear campaign against Livememe and the creators of the popular Reddit plugin Reddit Enhancement Suite (RES). Miltz claims that both organizations colluded with one another to skim traffic away from Quickmeme using a server called resme.me.

“There has been no malicious voting from quickmeme,” Miltz told the Daily Dot. “We now believe the opposite has been used against us to maliciously push Quickmeme out.”

“RES is not at all associated with Livememe nor Quickmeme,” Sobel told the Daily Dot. “If resme.me performed any linkjacking, I’m certainly not aware of it and was never made aware of it by anyone who suspected it.”

It’s unclear Reddit administrators will ever lift the ban against Quickmeme. Even if it does, jokes_on_you states, Quickmeme will never be allowed back on AdviceAnimals.

On Thursday redditors’ favorite image-hosting service, Imgur, launched its own meme generator. It’s already begun to take over Quickmeme’s former dominant role on r/AdviceAnimals. Meanwhile, traffic to Quickmeme has taken a precipitous fall—and with it, potentially millions of dollars in advertising revenue. 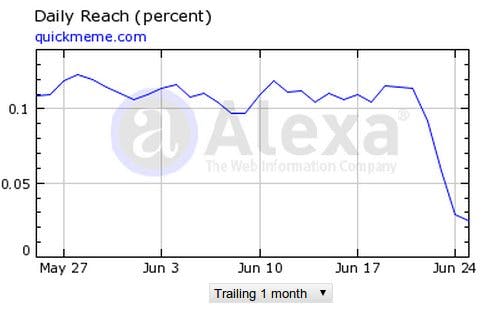