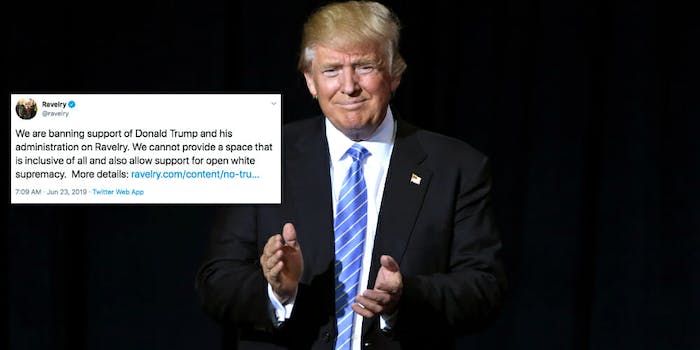 Trump supporters are still allowed on the platform—just not pro-Trump rhetoric.

Ravelry, the leading social networking website for knitting activities, banned posts that are supportive of President Donald Trump and his administration.

The company made the announcement on Sunday morning, noting that the platform will still allow users who support Trump and his administration. The users just aren’t allowed to voice their support for Trump on the platform.

The company added that the ban is not an endorsement of any political party, and it’s also not an attempt at shunning conservative voices.

“We are definitely not banning conservative politics. Hate groups and intolerance are different from other types of political positions,” the statement read.

It also warned users to refrain from trying to “weaponize this policy by entrapping people who do support the Trump administration into voicing their support,” and not to “antagonize conservative members for their unstated positions.”

Much of the policy was first written by a roleplaying game site RPG, which enforced a similar ban in October after an almost year-long debate, a disclaimer at the end of the statement read.

Within hours of Ravelry’s announcement on Twitter, thousands of people began showing their support–with some urging other social media platforms to follow in its footsteps.

Deplatforming fascism is a good thing. Support Ravelry, and ask your favorite community sites when they will do the same thing. https://t.co/aXOw8K94vb

It encouraged many to sign up for the platform–with some even taking up knitting.

This makes me want to start knitting again.

Former journalist Hillary Sargent posted a Twitter thread detailing why she thought this was a bad move on Ravelry’s part.

“The way out of where we are as a country IS NOT to vilify every person who passively or actively supports @realDonaldTrump,” she wrote in a tweet. “Ravelry was never overrun with white supremacists sharing swastika afghan patterns. Suggesting that knitters who voted for Trump are dangerous is bonkers.”

Others also suggested that this move borders on censorship and a strong political stance–straying from the platform’s agenda of inclusivity.

Refuters to that sentiment argued that this is just a matter of differentiating between morality and politics which, under the current administration, has become difficult to separate.

When your political and religious beliefs insist on harming others in a real-world way (aka Trumpers), that's where tolerance ends. Bye!

It’s not clear whether users were being harassed by pro-Trump content and rhetoric. Ravelry did not immediately respond to the Daily Dot’s request for comment.

I think it’s just the staff getting tired of of coping with the never-ending BS. Also, they’ve been more and more explicitly open to marginalized people recently.

Recently, social media platforms have struggled to find the proper balance of ensuring the right to free speech while still moderating hate speech. Facebook recently banned numerous far-right figures but is also having a hard time keeping white supremacy and nationalism off its platform. Twitter is also researching whether banning white supremacists from its own platform would be a productive move.