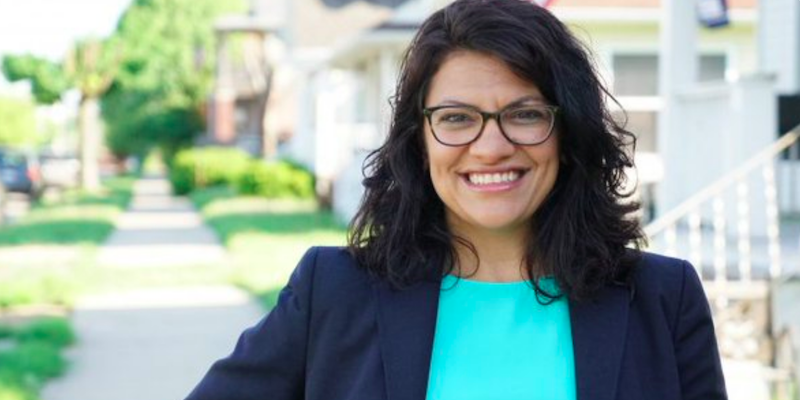 Tlaib is the first Palestinian-American in the U.S. Congress.

Rashida Tlaib has won her House race in Michigan, making her the first Palestinian-American representative in the U.S. Congress, and one of the first Muslim-American women to win a seat in Congress.

Tlaib was favored to win in Michigan’s 13th; after winning her primary, she ran without Republican opposition. Her seat was vacated by former Rep. John Conyers, who resigned in the wake of a sexual harassment scandal.

The race was called for Tlaib by Decision Desk HQ and BuzzFeed.

Tlaib was elected to the Michigan House of Representatives in 2008; she was the first Muslim to serve in that state’s legislature. After three terms in the House, she went to work at the Sugar Law Center for Economic and Social Justice as an attorney, where she worked to combat anti-Muslim and anti-Arab sentiment.

Tlaib was born and raised in Detroit, Michigan, the daughter of Palestinian immigrant parents. When Tlaib won her primary in August, her mother draped the Palestinian flag over her shoulders in celebration.

“A lot of my strength comes from being Palestinian,” Tlaib said, reflecting on her primary victory.

She was one of nearly 100 Muslims running for office during the midterms. Tlaib and Amar Campa-Najjar, in California’s 50th district, were the two most high-profile candidates of Palestinian descent, but several candidates have put forth progressive views on the Israel-Palestine issue this election season. Tlaib, Alexandria Ocasio-Cortez, and Ilhan Omar in Minnesota have all criticized U.S. support of Israel and its actions that further marginalize Palestinians in occupied territory.

Tlaib ran on Medicare for all, environmental protection, immigration reform, a $15 minimum wage, and access to higher education, as well as Muslim- and Arab-specific issues, like overturning the travel ban President Trump put in place during his first month in office, among other progressive causes