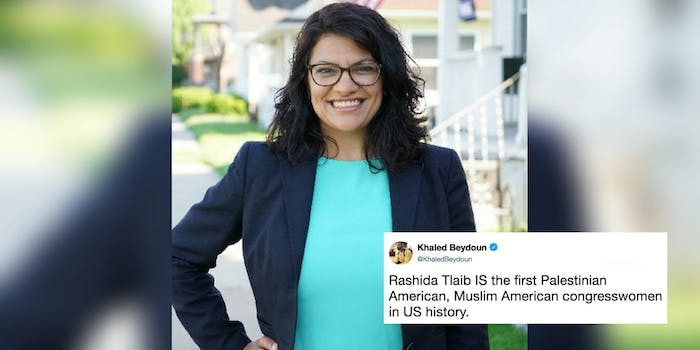 Rashida Tlaib is set to be the country’s first Muslim, Palestinian congresswoman

According to BuzzFeed News, Tlaib’s race was called shortly before 3 a.m. Wednesday, after she pulled just ahead of Detroit City Council President Brenda Jones. The congressional race was packed, as Tlaib and Jones ran alongside state Sen. Coleman Young II, and state Sen. Ian Conyers. Conyers is the great-nephew of former Congressman John Conyers, Jr., who had vacated the district seat in December after facing accusations of sexual misconduct.

A special election for the seat to finish out the last few months of Conyers’ term was too close to call Wednesday morning, though the New York Times reports Jones has a slight lead above Tlaib in that race.

Tlaib, a member of the Greater Detroit Democratic Socialists of America, is Muslim and Palestinian, and has “deep ties” to activist circles, BuzzFeed News reported. And while she may be at least among the first Muslim women to be elected to Congress come November, Democratic Minnesota congressional candidate Ilhan Omar, a Somali-American, is expected to cinch the election should she win next Tuesday. Another Muslim female candidate, Fayrouz Saad, is running in the Democratic primary for Michigan’s 11th District, but faces strong opposition in a majority-Republican district should she win.

Across Twitter, celebrants shared the news of Tlaib’s historic win.

Nothing like breaking news at 3AM. @RashidaTlaib becomes the first Muslim woman elected to Congress!! #womenlead

Rashida Tlaib just won #MI13 and becomes the first Muslim woman elected to Congress. For many, this is the beauty and promise of the American dream. For others, this is a nightmare. Relax, breath & know she's just the first of many. Wait until the midterms. Hold tight & enjoy.

Some saw Tlaib’s win as a win for their own representation, as well as a win for women of color—many who have turned out over the past year to affect change against the Trump administration.

Tlaib’s primary win, at the very least, is certainly meaningful at a time when President Donald Trump has issued policies against immigrants and legal immigration, against the visitation of people from Muslim-majority and Black-majority countries, and has recognized Jerusalem as the capital of Israel.

Thrilling news out of Michigan tonight! Rashida Tlaib, a candidate who supports Medicare-for-all and tuition-free public university, is elected to Congress and she’s a badass Muslim woman! It’s great to feel seen! https://t.co/FZar2Gpyfc

And while Tlaib’s win for Muslim representation in the House of Representatives became a focus of the majority of narratives supporting her election, many pointed out that she’s also the first Muslim-Palestinian American woman to take a congressional seat.

And congratulations to all of us, for continuing to push for a more progressive and inclusive America. pic.twitter.com/hl6lrBZHHT

The first Palestinian American woman, first Muslim American woman IS heading to the US Congress. History has been made and will continue to be made. Thank you @RashidaTlaib for inspiring us all. #DoneWaiting #MichiganPrimaries

Tlaib addressed her win via Twitter in the early hours of Wednesday, calling the moment unbelievable, and writing of her excitement to serve Michigan in Congress.

Thank you so much for making this unbelievable moment possible. I am at a loss for words. I cannot wait to serve you in Congress.

“I will fight back against every racist and oppressive structure that needs to be dismantled,” Tlaib reportedly said at her primary celebration, at which her mother draped the Palestinian flag over her during her speech. “You deserve better than what we have today with our president.”