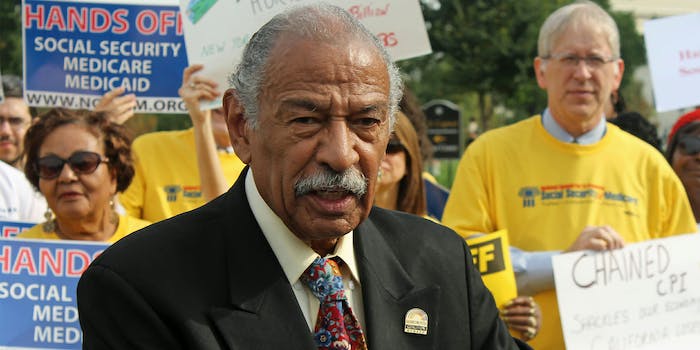 Former staff members have reported that Michigan Democrat Rep. John Conyers sexually harassed his female employees, but the Office of Compliance has reportedly helped cover up the allegations, according to BuzzFeed News.

On Monday evening, BuzzFeed News reported that Conyers settled a wrongful dismissal complaint by a former employee who said the longest-serving representative fired her for refusing his sexual advances in 2015. Those documents also included four signed affidavits from Conyers’ former staff members alleging that he repeatedly made sexual advances toward, and requested sexual favors from, female staff members. These allegations included inappropriate touching on the hands, legs, and backs, and the contacting and transporting other women who staff members believed Conyers was having affairs with.

The complainant said Rep. Conyers asked her for sexual favors and asked her to join him in his hotel room, and said she was made to work nights, evenings, and weekends to keep him company. Once, she said Conyers spoke to her about his sexual desires while working out of his room, and told her she needed to touch his penis, or find him a woman who would. She said Conyers suggested that agreeing to these favors would lead to salary increases or promotions. As part of the settlement, Conyers did not admit fault.

Three other staff members provided BuzzFeed News with affidavits outlining a pattern of sexual harassment. One woman who Conyers made sexual advances toward said she had been told by constituents that it was “well-known” that Conyers had sexual relationships with staffers, and that she and other female staff felt undermined by that detail.

BuzzFeed News disclosed that it first obtained documents from Mike Cernovich, the pro-Trump men’s rights activist. Cernovich said he turned the documents over to BuzzFeed in order to avoid being discredited by Democrats if he were to publish the documents himself. BuzzFeed News stated it independently confirmed the documents with four people directly involved, including the original complainant.

The documents subsequently revealed the secretive process in which Office of Compliance investigations are conducted—unlike under human resources departments, the office gives congressional employees 180 days to report sexual harassment, then goes forth with a process of counseling and mediation, but not until after a confidentiality agreement is signed. An employee can then take their complaint to federal district court, or to an administrative hearing for a possible negotiation and settlement.

For the woman in the wrongful dismissal complaint against Conyers, the office exchanged her silence for a settlement of more than $27,000. Additionally, her settlement was paid out through Conyers’ taxpayer-funded budget instead of the designated fund for settlements. Matthew Peterson, the law clerk who represented the woman, said the process was “disgusting,” and a “designed cover up” that felt like his client was betrayed by the government for coming forward.

“I was basically blackballed. There was nowhere I could go,” the woman, whose identity has been withheld, told BuzzFeed News.

As a result of the growing sexual harassment and assault allegations made against industry leaders and politicians, members of Congress have raised concerns over the current reporting and investigation process. California Democrat Rep. Jackie Speier and colleagues have introduced bipartisan legislation to restructure the complaint process, which calls for the Office of Compliance to name any member who enters a settlement, would allow complainants to forgo mediation and counseling, and would create a victims’ counsel and mandatory annual harassment training.

“The current process includes the signing of non-disclosure agreements by the parties involved. Congresswoman Jackie Speier has introduced legislation that will provide much-needed transparency on these agreements and make other critical reforms,” Pelosi said in a statement. “I strongly support her efforts.”

Update 12:30pm CT, Nov. 21: Conyers told the Associated Press that he hasn’t settled any sexual harassment complaints from staffers and had just learned about the allegations earlier today. Regarding the number of men who have recently been accused of sexual harassment and assault, he said he’s “been looking at these things with amazement.”

However, a workplace discrimination lawyer told the AP that is very unlikely Conyers wouldn’t have known about the settlement.