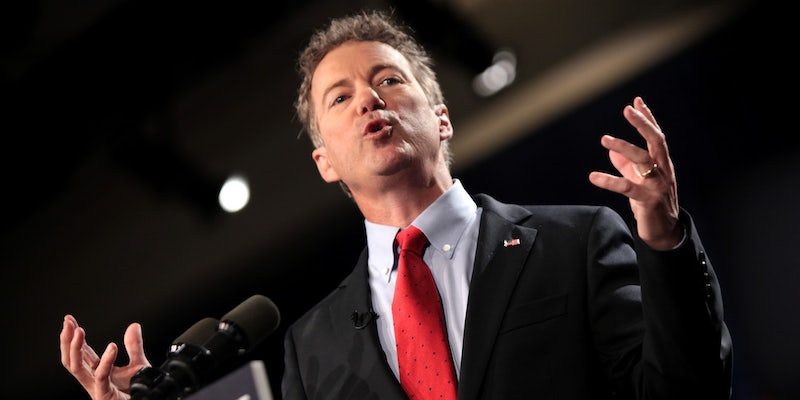 As Paul talked, controversial government surveillance powers were on the verge of expiring.

Sen. Rand Paul (R-Ky.) ended a 10.5-hour Senate floor speech just before midnight Thursday, as his impassioned plea to stop government surveillance pushed the Senate to the brink of a deadline to extend controversial spy powers.

Paul, a candidate for the Republican presidential nomination in 2016, was railing against sweeping surveillance legislation known as the USA Patriot Act, key provisions of which expire at midnight on Monday, June 1. Senate Majority Leader Mitch McConnell (R-Ky.) and many other Senate Republicans want to reauthorize those provisions without any reforms, but virtually all Senate Democrats and a host of Republicans want to pass a competing option, the USA Freedom Act, a reform bill that the House of  Representatives overwhelmingly approved last week.

The USA Freedom Act modifies and extends the soon-to-expire Section 215 of the Patriot Act, which the government has used to justify a National Security Agency (NSA) program that collects the details of Americans’ phone-call records. In early May, a federal appeals court ruled that Section 215 did not authorize that program. With a looming June 1 deadline, the government plans to wind down the operation as early as Friday.

For procedural reasons, Paul’s speech has delayed Senate business to the point where surveillance reform votes will likely take place over the weekend. Once the House adjourns Thursday for a week-long break, the only way to send a bill to President Obama‘s desk before the June 1 deadline will be for the Senate to pass exactly what the House passed, thereby eliminating the need to resolve legislative differences in a conference committee. But it is unclear whether the USA Freedom Act will receive the support of enough senators to pass a procedural hurdle known as cloture and then a final vote.

The reform bill ends the bulk phone-records collection program and shifts the responsibility for maintaining those records to phone companies. But because the bill does not completely end that collection or significantly curtail the government’s ability to secure the records, Paul opposes the bill, instead preferring to let Section 215 expire completely.

Paul began his floor speech at 1:18pm ET Wednesday and ended it at 11:49pm ET, for a total of 10 hours and 31 minutes. Senate rules require members to stand and speak continuously or yield the floor; there is no sitting, going to the bathroom, or pausing for an extended period of time. But a senator can yield to a colleague for a question—and, in doing so, escape those restrictions—without surrendering the floor.

Although Paul thinks that the USA Freedom Act does not go far enough, he wants to introduce several amendments that would somewhat assuage his concerns. He said during his floor speech Wednesday that he wanted a guarantee that McConnell would allow votes on those amendments.

One of Paul’s amendments would forbid the government from requiring tech companies to install encryption backdoors, which would let law enforcement bypass security measures built into American hardware and software. Another amendment would completely end bulk data collection, ban the NSA from searching foreigners’ records for data on U.S. citizens, and install a permanent privacy advocate at the court that handles surveillance warrant requests.

A third amendment would prohibit spying on Americans without a warrant in what Paul called “non-terror” situations. A fourth would convert the government’s National Security Letters—requests for customer data that often come with gag orders—into conventional warrants requiring court approval.

McConnell’s office did not respond to multiple requests for comment from the Daily Dot asking if the majority leader would guarantee votes on those amendments.