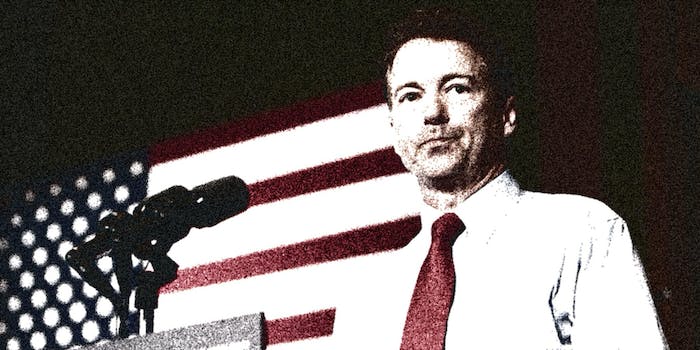 Livestream a day in the life of Rand Paul on Tuesday

Rand Paul is going where no presidential candidate has gone before: an all-day livestream.

The Kentucky Republican senator, who is currently polling at 3.6 percent in the 2016 GOP primary, announced on Monday that he will “livestream an entire day” on the campaign trail on Tuesday.

Tomorrow I am excited to bring my message of liberty to the country as the first Pres candidate to live-stream an entire day. #randlive

Paul’s campaign will broadcast on Ustream, his chief digital strategist Vincent Harris told Rare. The livestream will show every campaign event that Paul attends and offer viewers “an unfettered look at the campaign’s daily operations—from how staffers conduct the hectic minute-to-minute schedule to Paul meeting his supporters on the trail.”

The livestream will end Tuesday night as Paul offers live commentary on the first Democratic debate.

Mike Millican, a digital media adviser to the Paul campaign, told the Daily Dot in an email that Paul “will answer some of the most interesting or popular [questions], at his discretion, during travel time between events.”

While Republican presidential frontrunner Donald Trump is famous for his direct and voracious Twitter use, it is Paul who commands perhaps the most talented group of new-media staffers. He is also one of the most popular Republican candidates among tech-savvy and politically consequential millennials. And he has his own selfie app.