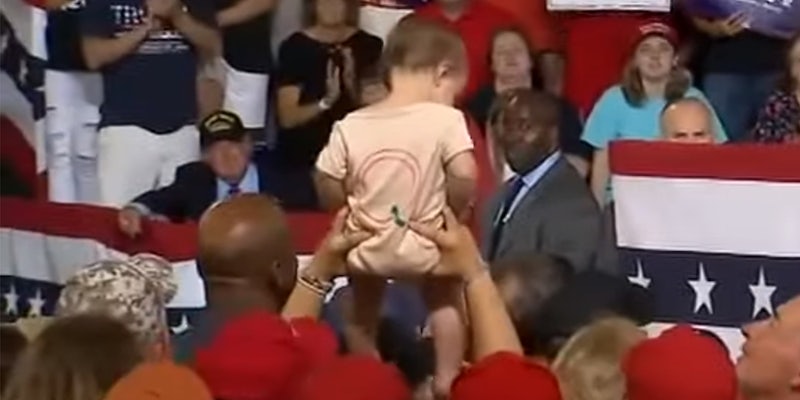 The parents are not missing their moment.

After taking a month off to recharge, the QAnon poster returned with a vengeance in July, taking advantage of the arrest of financier/sex offender Jeffrey Epstein to post dozens of new drops.

The Epstein arrest has, in turn, spiked a slew of new articles about the QAnon conspiracy theory itself, which continues to suck more people in, creating an incentive for a never-ending loop of ever-crazier theories and plots that will somehow become both more and less believable.

The latest zany scheme QAnon believers have put forth began Wednesday night during President Donald Trump’s race-themed rally in North Carolina. At some point during the festivities, a young couple held aloft their baby, who was wearing a homemade onesie with “TRUMP” written on the front, and a large “Q” on the back.

The president pointed at the baby and declared her “beautiful” and “like from an advertisement, perfect” before going back to lobbing insults at the Democratic reps who make up “the Squad.” And immediately, #QBaby was born.

While it was a brief moment, one of many once-strange occurrences in an hour-plus speech, Trump’s singling out of a baby in a Q shirt (even though the “Q” was on the back and there’s no indication he saw it) has already become a seminal event in both the Q movement and the lives of the baby’s parents, Cassidy Bailes and Roman Riselvato.

Immediately after the event, the family took to social media, where Cassidy has a small YouTube channel with a few videos spotlighting her life, including a new one about the encounter.

The couple also made their first “media” appearance on the livestream of the prominent QAnon guru who goes by InTheMatrixxx.

Appearing on a stream with several thousand viewers, the Bailes talked at length about their involvement in the Q community. Roman is the more politically inclined one, and first introduced Cassidy to Q as part of him “giving her tidbits about what happens [in politics]…so that she understands right from wrong,” as he put it.

The couple also talks about how Roman got turned on to QAnon by a co-worker who showed him a popular Q-decoding YouTube video, Roman’s belief that “it’s not just a conspiracy, it’s the future of our country,” and that they think Q sent a sign to Cassidy by turning her radio on and off.

Then they spoke at length about how haters and debunkers are trying to “kill their buzz” and that there’s no way Q isn’t real because “there’s too much proof.”

Though it should be noted that when asked, the baby’s parents weren’t clear on whether Trump actually saw the Q. But both they and the show’s hosts decided that he definitely had. “He knew it was there,” one said, not presenting any evidence.

This is the most pivotal time in human history & our trajectory on this planet is about to change. The #QBaby is a symbol of Good prevailing over Evil – as more news hits the public re: Satanism, child sacrifice, & sex trafficking, the baby represents the dawn of new era. #Qanon pic.twitter.com/uu7WgnenZL

#QBaby’s parents’ brush with fame seems fairly minor so far, as the video they made has only about 1,100 views, and neither Cassidy’s YouTube channel nor the new Twitter account Roman created appear to have seen a large influx of followers.

Their channel is too small to bring in ad revenue, but Cassidy sells hair care products on her Instagram, which was plugged during the InTheMatrixxx interview.

At this point, their reward from the incident will probably just be a small amount of fame in a cult-like community. But if they keep at it, they might get to a point where #QBaby is a real money generator for them.

When reached for comment, Cassidy Bailes told Daily Dot that their plan going forward is to “continue to reach out and help the conservative party under Trump continue to learn about QAnon and fight for the liberty of our country with our QBaby leading the way at such a young age as an example.”

They also plan to “try to get on with networks to inform them about QAnon and its great followers and patriots of this beloved country.”

So why did #QBaby take off in the first place? It’s not like Trump actually mentioned Q or gave any indication that he knows what it is. Naturally, the QBaby has a messianic element to her— thanks not only to Q believers’ obsession with “saving children,” but also various references in multiple drops, Q believers think she will be what finally forces the media to ask Trump about Q and puts him on the record as to whether it’s real.

The fact that no reporter has ever asked Trump about QAnon continues to be a major grievance in the community. QAnon gurus and rank-and-file followers alike constantly demand that the media “ask the Q” and thereby force Trump to either “end this” or confirm that everything QAnon has said is real. But why would QBaby cause this? Because in Q drop 2347, Q quotes a tweet from a user named “QAnonBaby” who claims to have had a conversation about QAnon with Trump.

Q then adds the cryptic text:

The picture will be the signifier.

The signifier will ‘force’ the Q.

QAnon’s loyal disciples interpreted this to mean that because the user Q quoted in the old post was “QAnonBaby,” and Trump pointed to a baby with a Q onesie, that the baby was “the picture” who will be “the signifier” who will “force the Q” and get someone in the media to get Trump on the record about Q.

So it’s a messianic prophecy filtered through several layers of rhetorical nonsense.

So did the media “ask the Q” of Trump? Was the baby “the signifier” that would “force the Q?” Of course not. In the first pool spray the morning after the rally, nobody brought up the baby or QAnon, though Trump was given an opportunity to lie about his reaction to the “send her back” chants that became the biggest story of the day.

But “the Q” not being asked this time hardly matters, and never really has. Trump has never been asked about QAnon by the many Fox News personalities he speaks with regularly. He’s never been asked by any of the right-wing radio hosts whose shows he graces with his presence. And he wasn’t even asked at the social media “censorship” summit he held earlier in July, which had several Q-friendly personalities in attendance. It’s also not clear why it even matters if Trump is asked about Q, since his answer will probably something noncommittal along the lines of “a lot of people are talking about it.”

What matters to Q believers is that Trump looked in their direction and favored them for an instant.

This is the kindling that fuels the fire of QAnon—their assurance that Trump is on their side, and tosses them scraps of affection that only they know are real. So when the prophecies fail, when the signs and clues amount to nothing, they still have Trump, and Trump still has them. And there’s likely nothing that will change that.