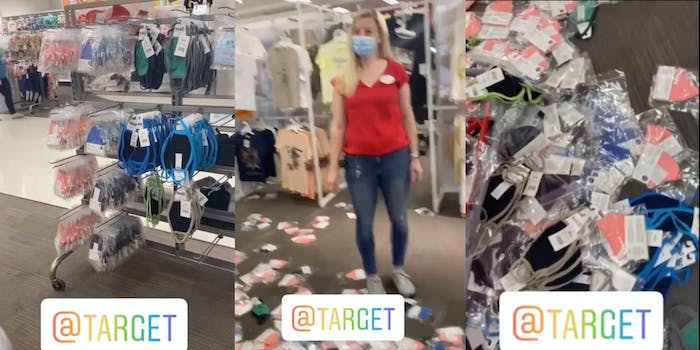 She also films the subsequent confrontation with employees and her arrest.

A woman shopping at Target threw a child-like temper-tantrum after seeing the store was selling face masks.

In the video, which she filmed herself, the woman, staring at the display of face masks, says, “Finally, we meet the end of the road.”

“I’ve been looking forward to this shit all my fucking life,” she says. Soon after, she starts throwing the masks off the display they’re on until all of them are scattered about on the floor.

“Target,” she says, “I’m not playing any more fucking games. This shit is fucking over.”

No one attempts to stop her as she destroys the display.

Later, two Target employees confront her and ask her to stop. While it’s hard to understand what the employees say, in the video, the woman is clearly heard saying, “Why? You let everybody else do it, but I can’t do it because I’m a blonde white woman?” The woman also says she’s wearing a $40,000 Rolex watch.

A second video that she filmed on Instagram Live shows that police were later called. While speaking to police, the woman, who is never seen on camera, claims she’s a spokesperson for the White House. She also rambles about the deep state and QAnon. “I was hired to be the QAnon spokesperson,” she says.

“Call [President] Donald Trump and ask him if you don’t believe me,” she says. When the police ask for Trump’s phone number, the woman only says “she’s on the phone with him all the time.”

Police officers later ask her to put her phone down and arrest her.

“You’re doing this to me because I’m Jewish,” the woman exclaims. “This is Nazi bullshit.”

According to the Redditor who posted the second video online, both incidents happened after her husband said he wanted a divorce and kicked her out. She later went to a hotel—then Target—and back to her hotel, where she was later kicked out, again. When she went back to her house, her husband stopped her and called the cops.