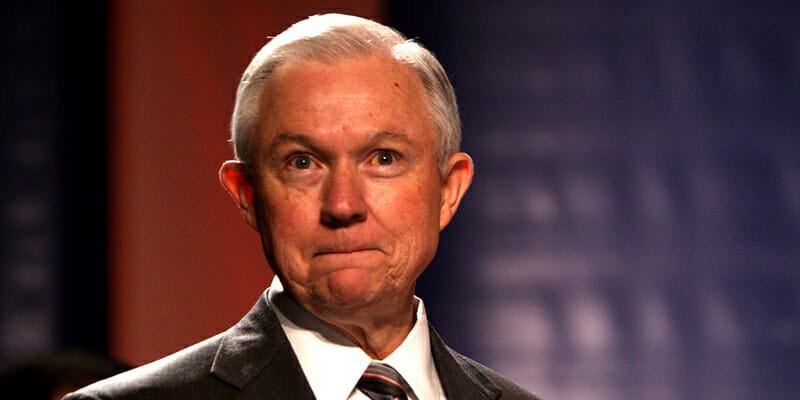 It's amazing what can be spun.

Believers in the QAnon conspiracy theory tend to follow a pattern whenever news breaks that contradicts the fantasy world of mass arrests, tribunals, and deep state cleansing that Q has spun.

It starts with disbelief, veers toward self-justification, then gets turned into even more fervent belief in the conspiracy—usually thanks to Q dropping a few posts that make believers feel like they’re on the right track.

That pattern has been in full force over the last few days, first as Democrats emerged from the 2018 midterms having flipped the House of Representatives, then again as Attorney General Jeff Sessions—a favorite of Q acolytes—was fired.

Neither of these things were part of The Plan that Q has been weaving over the last year.

For months, the supposed Trump administration official famous for his bad predictions and cryptic nuggets of supposedly classified information had been forecasting nothing less than a massive surge in Republican gains.

As early as May, Q rhetorically asked if there was a “red wave coming” in regards to the midterms, which would bring “strength” and “justice” in conjunction with some unknown event on Nov. 11.

Q pumped up his followers again and again with vague promises of such a “red wave,” posting about it as “shining light” and a “tsunami” that would swamp the evil cabal controlling America.

It didn’t happen, and many QAnon believers didn’t take it well that their avatar had apparently been wrong.

Here are some QAnon believers getting disillusioned by losing the House. Turns out if you convince your fans that Democrats are Satanic pedophiles, they'll be upset when they take over part of the government! (h/t @travis_view) pic.twitter.com/39uGO1tMA5

The moment Fox News called the House for Democrats caused an explosion of anger and anguish from believers,

“HOW’S THE FUCKING PLAN WORKING OUT NOW? THE PLAN IS FUCKING DEAD, THE DEEP STATE WINS AGAIN AND MR TRUMP SHOULD HAVE LISTENED TO ME/SOME OF US AND DROPPED THE HAMMER ON THE DEEP STATE AWHILE AGO!” shrieked one anonymous poster on Voat.

Other anons on 8chan, where Q makes his posts, called Q full of shit, a disgrace, and questioned the integrity of Q’s plan and the Republican Party.

QAnon believers on /qresearch/ are not reacting well to projections that Democrats will take control of the House. pic.twitter.com/OhTzuxDz76

But Q himself kept the faith with a series of posts assuring acolytes that everything that happened was part of the plan, all was well, and Trump was still in control.

Just hours after the House officially flipped to Democrats, Q declared that all was well. “We got what we needed,” he declared, because the “Senate means everything” and “POTUS has ultimate authority.”

And because only the Senate matters, and Republicans picked up seats in the Senate, that means the red wave actually happened and Q was right the whole time.

The turn from despair to hope became even more entrenched when additional Q posts insinuated that the Senate was always the “target” and “primary objective”—in spite of the fact that Republicans already held the Senate.

Some speculated that the forthcoming blizzard of sealed indictments (which is actually a hoax based on a complete misreading of how the district court system works) will send so many Democrats packing that Republicans will retake the House in the ensuing special elections.

No matter what happens tonight its not over. 1. Voter fraud will be exposed and dealt with. 2. Mass arrests will create a huge amount of vacancies creating special elections. 3. Fisa brings down the house. It takes something earth shaking to create a tsunami. …-

Many others put their faith in the nebulous event called “declas”—the declassification of supposed FISA abuses that led to the FBI investigation of the Trump campaign. While a huge part of Q world, it’s actually something Trump was hot on briefly before dropping the matter, seemingly for good.

Despite that, many took to Voat and Twitter declaring that nothing that happened in the midterms mattered, because “declas” would “bring down the House” anyway.

And I leave this with you my people…
DECLAS DECLAS DECLAS
FISA brings down the HOUSE#Qanon pic.twitter.com/eHOBVWQ9qf

Mission forward , Coming SOON to a theater near you.
MOVIE 2 – Coming this FALL. POTUS DECLAS FISA [FULL] brings down the house ! pic.twitter.com/KbcJWhDX3J

Just as Q believers were coming to terms with the midterm loss (it was a win!), Trump started the pattern all over again when he fired Jeff Sessions.

In Q world, Sessions was a secret ally of the president, a “silent executioner” playing the role of Trump target, while all the while getting ready to unseal the indictments and unleash “the storm.”

Admonishments to “Trust Sessions” were a major part Q’s early iconography, back when it was much more about sealed indictments and less about every conspiracy.

In reality, Sessions’ ouster had been the worst kept secret in American politics, given that Trump spent an inordinate amount of time trashing the Attorney General that he’d nominated, even though he’d been the first senator to support his insurgent bid for president.

Those dueling realities came into contact again. How could Q acolytes “trust Sessions” when he’d just been fired? Weren’t he and Trump secretly in league the whole time? How could Q lie about this?

Just like the midterms, disgruntled believers took to social media to express their bafflement that the plan was not coming together.

And just like before, Q posted to pat them on the head. He posted a “thank you for your service” message to Sessions as “Q+” which is the moniker his followers believe means it’s actually Trump posting.

In a flash, the mood of Q believers brightened. Sessions wasn’t fired, he was allowed to leave because he’d “finished the job.” how do you know? Because Q+ thanked him for his service, and Q+ is Trump. Why would you thank someone for their service if you fired them?

Even beyond that, other Q references were retconned into being about new Acting AG Matt Whitaker. Maybe he was the REAL hinge upon which the indictments were laid. Declas was still going to bring the House down, the booms were still coming, everything is proceeding exactly as needed. Trust the plan.

The midterm loss and the abrupt firing of Sessions show a president and party in chaos, scared of what’s to come, and reeling from what they’ve lost.

But in Q land, all fears are allayed. Q has their back. And no acolyte should believe what they see and hear—only what Q tells them.