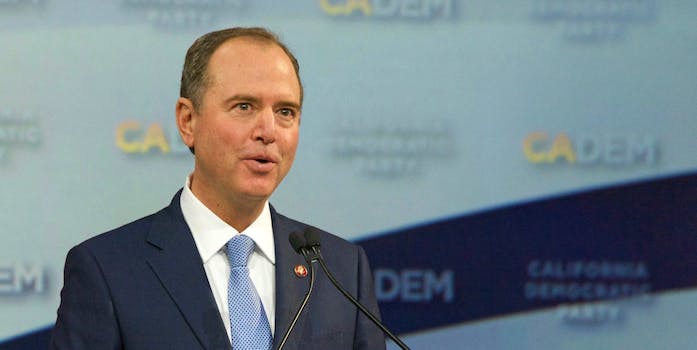 The rumors they are spreading are vile.

If you knew without a doubt that someone killed a child, what would you do about it?

What if it wasn’t just anyone who did this horrible thing, either. It was a powerful person with a national platform, who runs in the highest circles of politics and business. And worst of all, nobody believes you that this person is a child killer. The media loves them, they have a spotless record, they’re interviewed on national TV all the time, and the person’s enablers have scrubbed the internet of the existence of the crime itself.

So no matter how much you research it, you’ll never find the proof of what they did. Not that anyone would believe you, anyway. That’s how powerful this person is.

What sounds like a James Patterson novel is actually what many believers in the QAnon conspiracy theory see in the current impeachment effort. And that “powerful person” is Rep. Adam Schiff (D-Calif.), who has played the most visible role in the drive to investigate and impeach President Donald Trump.

Because of Schiff’s high profile in the Trump investigation, QAnon believers have put Schiff at the center of a number of extremely dark and violent rumors—that he’s had various people killed through a helicopter crash, that he’s involved in a drug and pedophilia ring, paid off victims of sex abuse, or most disturbingly, that he himself has murdered children and dissolved their bodies.

And all of it is being done at the hip Standard Hotel in Schiff’s West Hollywood district.

None of this has any evidence to support it, and nobody has credibly accused Schiff of committing any kind of crime. In fact, the only evidence that Schiff has done anything untoward other than vague allegations of salacious “photos” of Schiff in the drug den of Democratic donor and recent arrestee Ed Buck.

Those “photos,” played up by conservative activist and prankster Jack Burkman, turned out to be screengrabs of an adult film.

But the narrative that QAnon and its gurus have built around Schiff is so bleak that it’s inspired at least one near-physical altercation with the House Intelligence Chair—a Trump supporter screaming at Schiff, “you kill young kids.”

And the narrative got even more traction thanks to a  cryptic tweet from President Trump about Schiff not “paying the price” for being a “sick man.” While Trump has used the phrase “sick man” about Schiff before, it was all the signaling that QAnon believers needed to think Trump was making a reference to “what happened” at the Standard Hotel.

So why are they going after Schiff, rather than trying to poke holes in the impeachment narrative? Why would Trump voters, or anyone, think Schiff “kills young kids” in the first place?

Part of it has to do with Q’s ever-present bad record of predictions about impeachment. In one of Q’s first posts, the anonymous avatar claimed Trump was “100% insulated with zero risk of impeachment (fact.)”

Further QAnon posts claimed that Democrats would attempt to impeach both former Deputy Attorney General Rod Rosenstein and Supreme Court Justice Brett Kavanaugh, that Speaker Nancy Pelosi would “pull” the threat to impeach Trump due to political opposition, and that Trump amazing successes are “not good enough” for Democrats who are hellbound to impeach him no matter what.

More recent posts have been more cryptic than that, with Q claiming in late 2019 that impeachment is a last-ditch desperation heave to jam up the Senate and prevent the beginning of the long-promised mass arrests.

With very little useful material coming from Q, it’s up to the avatar’s most prolific interpreters and gurus to keep the conspiracy focused on impeachment. And they’ve been all over the place, with allegations that the deep state is killing various celebrities to “distract” from impeachment, and implying that Trump allowed Democrats to win the House back just so they could stage a sham impeachment.

But the worst of it has been saved for Schiff.

To the Q team, Schiff is indeed a killer of children who has walked free from heinous crimes. It’s still not quite clear what the Standard Hotel “incident” is supposed to be, and it’s been alleged to include everything from a staged helicopter crash to a massive child trafficking or drug smuggling ring, and possibly even the site of the murder of a young girl.

Some have brought up potential links between Schiff and Ed Buck, the Democratic donor recently arrested for running a drug ring and suspected in the deaths of two gay men. But while conspiracy theorists have tried to invent some kind of close friendship between the men, the extent of their relationship appears to be one photograph taken at a fundraiser, and Buck’s donation of $2,700 to Schiff’s campaign in 2016, money that Schiff donated to charity after Buck’s arrest.

Many posts are simply rhetorically asking Schiff: “What happened at the Standard Hotel?”

While the details of these theories continue to shift, the idea has caught on in mainstream conspiracy theory circles. “The Standard Hotel” was referenced by fringe congressional candidate and Lev Parnas’ running buddy Robert Hyde and Laura Loomer has referenced a Standard Hotel “video” that Schiff is desperate to suppress. They are also pushing rumors that Schiff is an avowed pedophile with numerous settlements to his name, posts that have gone viral to the point Snopes had to debunk them.

Tweets referencing Schiff and his “activities” routinely get thousands of retweets, and the rumors have spawned countless blog posts and tweet threads—all accusing Schiff of doing some of the worst things possible.

The point of all this is to muddy Schiff’s credibility to the point where any Trump supporter watching impeachment will see him as not only biased and corrupt, but sick and vile.

It’s not a stretch that believers in QAnon, many of whom have already committed crimes, would agree that Schiff is indeed a sick man who has possibly killed children, and that Q has provided the proof. (Schiff’s office didn’t respond to a request for comment from Daily Dot, but a Schiff spokesperson previously told Politifact that a previous rumor that Schiff had used taxpayer funds to settle a sexual harrassment suit was “obviously and categorically untrue.”)

Never mind that the proof is vague, unsubstantiated, and based around a crime with no victim or allegation of a crime. To many people, it’s now settled fact that Schiff has killed one or more children, abused them, paid them off to cover up the abuse, and killed other people involved in the cover-up.

But no matter what conspiracy theories Schiff is pulled into, the fact remains that nobody has ever credibly put Schiff at the scene of a crime, no victim or loved ones of a victim have come forward, and every attempt to “prove” Schiff committed some kind of terrible crime ends up fizzling out. So he’s either the greatest criminal mastermind of all time and has total control of what gets put on the internet about him, or he didn’t do anything wrong.

Why Trump’s Justice Department would allow such a heinous person to go free, of course, is another question, and one that Trump’s supporters aren’t quite so eager to ask.