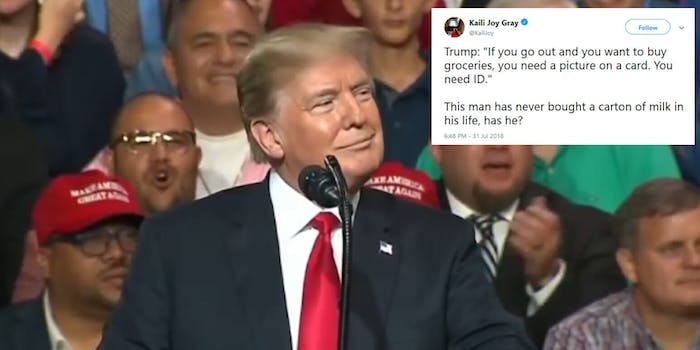 He was pushing his support for voter ID laws.

President Donald Trump told a crowd in Florida on Tuesday night that you need a photo identification to buy groceries, reasoning Trump gave in support of voter ID laws.

The internet quickly reminded the president that no, you don’t need an ID when you are buying groceries.

Trump made the remarks during a rally to support Ron DeSantis, a Republican running for governor in Florida, just days after the candidate published an unabashedly pro-Trump ad where he taught his children how to “build that wall” with blocks and used The Art of the Deal as a bedtime story.

At first, the president spoke about voter IDs.

“We believe that only American citizens should vote in American elections,” he said. “Which is why the time has come for voter ID, like everything else. Voter ID.”

The Trump pivoted to what he apparently thought was a very apt example:

President Trump, telling his supporters why he wanted Americans to be required to show identification before casting their votes, claimed that they needed to have IDs "to buy groceries." He did not elaborate. https://t.co/iYSYzA2XxM pic.twitter.com/H4DGjZVYxy

To be fair, to purchase alcohol and sometimes certain over-the-counter medications requires an ID. Or at stores like Costco, where you need a membership. However, you don’t need any identification to buy everyday items.

Trump’s odd assertion that you need an ID to buy groceries was quickly mocked.

In Florida tonight, Trump says you need photo ID to buy groceries. Seriously. You can’t make this insanity up.

Trump: "If you go out and you want to buy groceries, you need a picture on a card. You need ID."

This man has never bought a carton of milk in his life, has he?

I have a story that Donald Trump will find amazing. I went to Whole Foods without my ID and came home with 10 bags of groceries. The end. #groceryID pic.twitter.com/FYSoMXOjJ0

By noon all Republicans will insist that you've always needed ID to buy groceries.
By tomorrow morning they'll all believe it.
By Friday there'll be a Grocery ID bill.
By Saturday we'll have the op ed "Why Arguing With Grocery Security Traditionalists Helps Trump"

It’s true what Trump said (I know…I’m shocked, too). I went to buy groceries this morning—castor oil, essence of turnip, coal, you know, the essentials—and I forgot my ID.

I was turned away and had to walk home in the snow (uphill both ways) without my supplies. Sad!

Donald Trump about having to show your ID to buy groceries: pic.twitter.com/KCeQP9iPI3

Next time you get your milk, eggs, and bread, don’t forget to flash your ID.