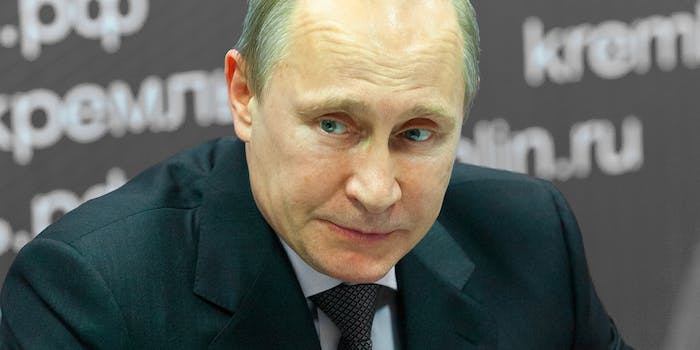 The new intelligence is derived from diplomatic sources and spies, NBC reports.

U.S. intelligence officials are said to have “a high level of confidence” that Russian President Vladimir Putin personally approved a covert operation aimed at disrupting the U.S. presidential election.

Citing two senior U.S. officials, NBC News reported exclusively Wednesday night on new intelligence said to demonstrate a direct tie between Putin and the cyberattacks that shook the Democratic National Committee (DNC) this summer. The intelligence originated with diplomatic sources as well as spies working for U.S. allies, according to NBC News.

Clinton’s feud with Putin is quite known. Near the end of her tenure at the State Department, Clinton publicly cast doubt on the integrity of Russia’s parliamentary elections—an accusation that infuriated Putin as protesters amassed in the streets of Moscow. In 2008, while still a U.S. senator from New York, Clinton famously claimed that Putin has no soul.

This new intelligence allegedly suggests that Putin’s vendetta “morphed into an effort to show corruption in American politics,” NBC says, with its source apparently confirming that another goal was to “split off key American allies by creating the image that [other countries] couldn’t depend on the U.S. to be a credible global leader anymore.”

The Central Intelligence Agency (CIA) is said to be highly confident that Russia orchestrated cyberattacks against Democrats this year with the specific goal of aiding President-elect Donald Trump’s campaign. The Washington Post reported Friday that CIA briefers had informed key U.S. senators two weeks ago about “a growing body of intelligence from multiple sources” confirming Russia’s involvement.

Late on Friday, the New York Times reported that U.S. intelligence officials are highly confident that Russian operatives also hacked the Republican National Committee’s servers, but chose not to release the contents. Both the FBI and sources within the Office of the Director of National Intelligence have cast doubt on the CIA’s assessment of Russian intent.

Whereas Clinton and Putin could not have a worse diplomatic relationship, Trump and Putin’s has been characterized in the press as a “budding bromance.” Last December, Putin publicly complimented Trump in a statement calling him a “very colorful, very talented” person. (See disputes over translation here.)

Addressing the compliment, Trump replied: “It is always a great honor to be so nicely complimented by a man so highly respected within his own country and beyond.”

U.S. intelligence agencies are reportedly planning for some sort of retaliation against the Russian president, which may involve exposing details about his vast personal wealth. Citing a former CIA official, NBC suggested that President Obama “may feel compelled” to act before leaving office next month.