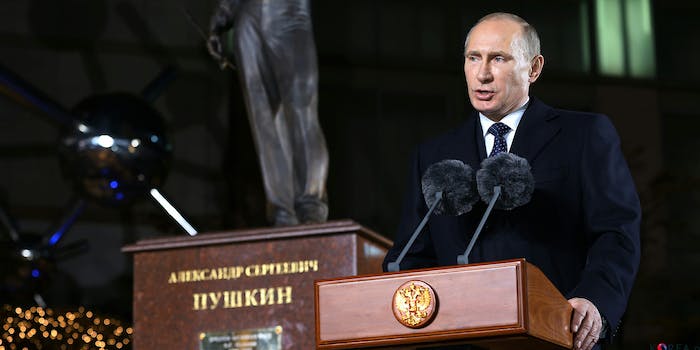 Russian President Vladimir Putin said on Thursday that “patriotically minded” private hackers in Russia could have been involved in helping President Donald Trump get elected in November, a shift from his previous hard denials of any Russian involvement.

Putin made the comments during a meeting with news agencies in St. Petersburg on Thursday, according to the New York Times. Characterizing them as private citizens, Putin called hackers “artists” during the meeting, the Times reported, and he seemed to imply that hackers in Russia may have played a role in hacking the Democratic National Committee during the election.

“If they are patriotically minded, they start making their contributions—which are right, from their point of view—to the fight against those who say bad things about Russia,” Putin said, according to the Times.

The Russian president has repeatedly denied that the Russian government played a part in trying to influence the election. However, multiple United States intelligence agencies concluded with confidence that Russia played a role in tilting the election in favor of Trump.

The new quotes from Putin come as probes into Russian interference and possible ties to Trump’s campaign continues to grow. The investigations, and frenzy, is expected to reach a peak as early as next week when former FBI Director James Comey testifies before Congress—possibly about Trump allegedly asking him to stop the FBI’s investigation into ties between former National Security Adviser Michael Flynn and Russia.