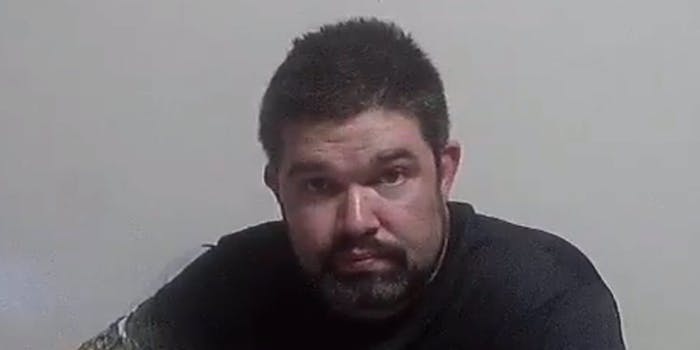 It's his third time.

Jason Van Dyke has been suspended by the Texas Bar yet again.

This is his third suspension. The disciplinary action is based on a complaint filed by his longtime nemesis, Thomas Retzlaff.

Retzlaff said that the current suspension is based on a complaint he filed “regarding Van Dyke’s criminal conviction for filing false police reports (for his role in the burglary of firearms from a vehicle) and for tampering with a witness in that criminal case.”

In March, the Daily Dot reported that Texas police allegedly had audio of Van Dyke threatening the lives of Retzlaff and two other men.

They agree that in 2017, Retzlaff got Van Dyke fired from a job as a prosecutor by telling a friend at the office of Van Dyke’s Proud Boys connection.

The Proud Boys, self-described “Western chauvinists,” are classified as a racist hate group by the Southern Poverty Law Center. Van Dyke was the group’s lawyer; he also briefly led it. He is reportedly no longer involved with the Proud Boys.

In 2018, Van Dyke lost a second job. He blamed Retzlaff. Retzlaff denies it.

By then, the conflict between the two had a reached fever pitch. Retzlaff filed a bar complaint against Van Dyke. Van Dyke fired off some ill-thought emails to his nemesis. According to the Texas Bar, in one email, he wrote, “I promise you this motherfucker: if my law career dies, you die with it.”

Van Dyke inexplicably copied the Texas Bar on the email. Unsurprisingly, he was subsequently disciplined.

The most recent disciplinary order notes that Retzlaff filed the complaint.

The suspension is based on allegations that Van Dyke filed a false police report regarding theft of his firearms. A witness in that case later failed to appear. Foul play wasn’t suspected. Van Dyke took a plea of no contest, though he continued denying the charges.

Van Dyke also pled no contest in the disciplinary case. He told Law.com that the coronavirus pandemic was delaying his trial, so although he denies the allegations, he opted to settle while most attorneys weren’t practicing anyway.

“I had to choose between attempting to run a law practice with this hanging over my head,” he reportedly said. “Or I could take the six month active suspension and reopen my business in six months.”

The Texas Bar judge found that Van Dyke “had engaged in conduct involving dishonesty, fraud, deceit or misrepresentation, and that his conduct amounted to obstruction of justice,” Law.com reports.

The Texas Bar has ordered Van Dyke suspended for six months followed by 12 months probation. He is also ordered to pay the bar’s attorney’s fees of $6,400.

Van Dyke is licensed to practice law in Georgia, Colorado, and Washington, D.C. Retzlaff told the Daily Dot that Van Dyke could be disciplined by each.

“Disciplinary cases are pending in Georgia, Colorado, and Washington, D.C.” he said via email.

The Colorado Bar reports that Van Dyke was twice disciplined last year. Records indicate both are reciprocal disciplinary matters associated with complaints from Texas. A Colorado disciplinary proceeding from last May states, “Van Dyke made threats of physical violence to a complainant, thereby committing a criminal act that reflects adversely on Van Dyke’s honesty, trustworthiness, or fitness as a lawyer.”

The Washington, D.C. Bar website says that Van Dyke has a temporary disciplinary suspension; it isn’t clear what for. He has no public discipline on record in Georgia, according to the state bar.