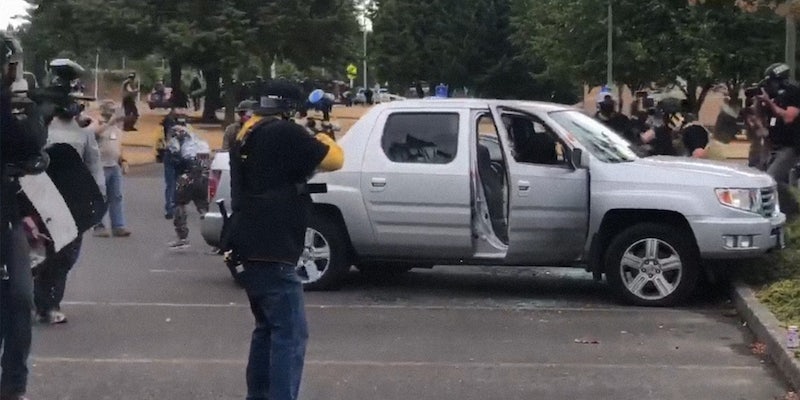 In one video, men in Proud Boys gear scream 'antifa' as they attack a man and destroy his truck.

Once again, dueling protests between right- and left-wing factions erupted into violence and destruction in Portland, Oregon over the weekend.

A viral video shows a group of men several observers identified as Proud Boys surrounding a man in a truck, attacking him and destroying his vehicle.

On Sunday afternoon, right-wing demonstrators gathered for an event ironically billed as the “Summer of Love.” Local news reports that some of the roughly 100 attendees wore tactical gear and insignias associated with the Proud Boys, a notoriously violent far-right group that describes itself as “western chauvinists.” Videos and images show signage supporting former President Donald Trump and expressing hatred for liberals. A large banner hung from the roof said, “Free our political prisoners,” which may refer to those arrested for the Capitol riot. One man in the crowd wore a shirt that read, “I hate the left n racism.”

Meanwhile, leftist protesters amassed nearby, according to CBS affiliate KOIN. Local police had previously announced that they would take a hands-off approach during the demonstration. The mayor pleaded with both sides to “choose love.”

In a scene that has been frequently repeated over the last few years in Portland, violence and vandalism broke out between the two. Paintballs, airsoft guns, chemical spray, and other weapons were used. The Washington Post reports that two people exchanged gunfire. One man was subsequently arrested and charged with unlawful possession and discharge of a weapon.

There are conflicting reports about what ignited the street brawl, as the Portland Tribune described it. The Tribune reports that it began when leftists, including “two men holding hands,” walked through the parking lot of the abandoned K-Mart where the right-wing demonstrators were holding their event. KOIN reports that someone attempted to drive a van into the lot, crashed, and fled. Some present told them that the driver tried to run over the demonstrators.

Subsequent videos show a group of men surround a different car, a silver truck, assault the driver, and destroy his vehicle.

The men were captured from numerous angles by reporters on the scene as they fired projectiles at the vehicle, slashed its tears, used chemical spray on the driver, and struck him. Several screamed “antifa!” and “he’s antifa!” as they attacked the man and his truck. Some of the attackers wore black and yellow, colors associated with the Proud Boys.

One video of the attack has a half-million views as of this writing. The Tribune reports that the assault victim’s condition is unknown.