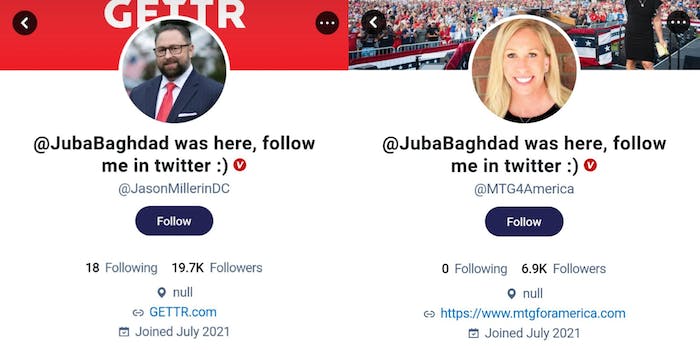 ‘You know you’re shaking things up when they come after you’: Hacker takes over top accounts on new pro-Trump app GETTR

The accounts for some of the site’s biggest users, including Miller himself as well as Rep. Marjorie Taylor Greene, were taken over on Sunday by hacker @JubaBaghdad.

The usernames for the hacked accounts were all changed to include a pro-Palestinian message:  “@JubaBaghdad was here :) ^^ free palestine ^^.”

Speaking with Insider, the hacker argued that the attack had been “easy” due to the site’s poor security posture.

“They should not publish the website before making sure everything, or at least almost everything, is secure,” he said.

Miller responded to the hack of his site by downplaying the severity, arguing that the problem was fixed within minutes.

“You know you’re shaking things up when they come after you. The problem was detected and sealed in a matter of minutes, and all the intruder was able to accomplish was to change a few user names,” Miller told Insider. “The situation has been rectified and we’ve already had more than half a million users sign up for our exciting new platform!”

Despite Miller’s assurances, however, @JubaBaghdad told Salon’s Zachary Petrizzo on Monday that GETTR was still vulnerable. Petrizzo says the hacker was able to show him all of the personal information he used while signing up for the site. (Editor’s note: Zachary Petrizzo previously contributed to the Daily Dot.)

Security woes are just one of several issues facing the novice platform. Shortly after launch, trolls flooded GETTR with pornographic images, much to the ire of the site’s conservative userbase.