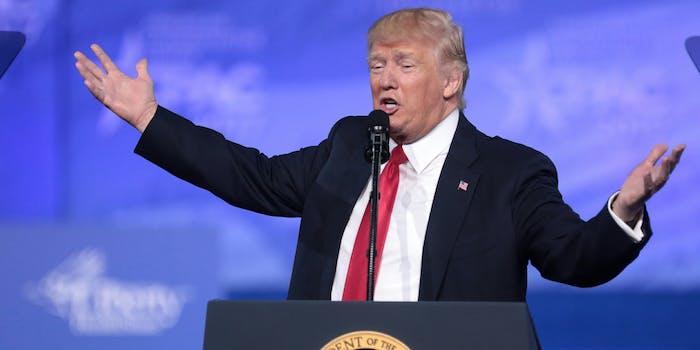 Did you know George Steinbrenner, the legendary Yankees' owner, received a presidential pardon?

News surfaced earlier late last week that President Donald Trump is reportedly asking what exactly his pardon powers are—including whether he can pardon himself, his aides, and members of his family.

Trump fired back against the self-pardon news, first reported by the Washington Post, both asserting a president’s “complete power to pardon” anyone in the United States of federal crimes as well as suggesting the “only crime so far is LEAKS against us.”

While all agree the U. S. President has the complete power to pardon, why think of that when only crime so far is LEAKS against us.FAKE NEWS

With that in mind, we thought it might be helpful to know what exactly those pardon powers are and highlight some interesting facts about them.

Let’s get the question everyone is asking out of the way first.

1.) Can Trump pardon himself or someone else in his administration preemptively?

Generally speaking, yes, he could. Probably. While no president has ever specifically pardoned themselves (more on that in a bit), there have been instances of presidents pardoning people who had yet to be convicted of a crime.

The Constitution gives a president absolute and unilateral power to pardon anyone—even before they are convicted of a crime. For example, President George Bush pardoned members of the Reagan administration in 1992 for their part in the Iran-Contra affair.

Bush’s son, President George W. Bush, commuted the sentence of Lewis “Scooter” Libby, sparing him from prison after he convicted of perjury, obstruction of justice, and lying to authorities.

2.) So what exactly does the Constitution actually say about pardons?

“The President shall be Commander in Chief of the Army and Navy of the United States, and of the Militia of the several States, when called into the actual Service of the United States; he may require the Opinion, in writing, of the principal Officer in each of the executive Departments, upon any Subject relating to the Duties of their respective Offices, and he shall have Power to grant Reprieves and Pardons for Offenses against the United States, except in Cases of Impeachment.”

“It is a stunning power, not much like anything else,” Harold Bruff a constitutional scholar and former dean of the University of Colorado Law School, told the Daily Dot earlier this year. “Most everything in our government is limited some way, but the law of pardon is plenary. It’s unrestricted. [It’s led to] some ugly ones in the past.”

3.) Who are some big names that presidents have pardoned?

4.) How many people have actually been pardoned or had their sentences commuted?

More than 36,000 people have been pardoned or had their sentences commuted by United States presidents. The president with the highest number of pardons or granted commuted sentences is Andrew Johnson with about 7,000. Two presidents had zero pardons or commutations: William Henry Harrison had zero pardons (because he died shortly after taking office), as did James Garfield, who was assassinated.

According to the Office of the Pardon Attorney, which handles presidential pardons, Trump has not yet granted any pardons—although, at least one member of Congress wants to know if that number is accurate.

6.) Do presidents have to make public who they pardon?

No, a president does not have to make pardons public, though they often do. Further, a president has no obligation to give any reason for pardoning someone, according to the Office of the Pardon Attorney.

5.) So, if a president has never pardoned himself, what happened with Richard Nixon?

Everyone knows Richard Nixon was pardoned—but Nixon didn’t pardon himself. President Gerald Ford pardoned him in 1974. It didn’t bode well for Nixon’s predecessor. After pardoning Nixon in 1974, he lost the 1976 election to Jimmy Carter.