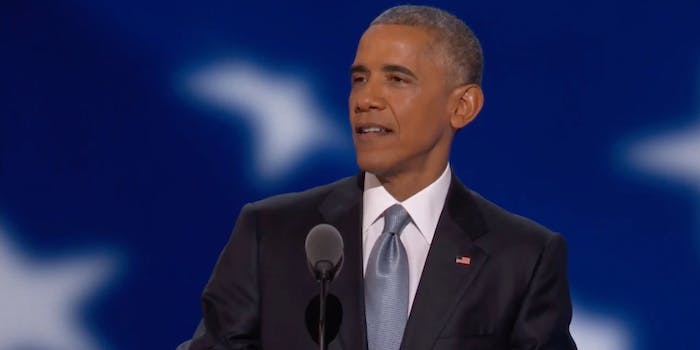 Obama sets the stage for the Hillary Clinton era

'Don't boo, vote,' the president told those critical of Trump.

In a barnburner speech at the 2016 Democratic National Convention, President Barack Obama said that there has never been anyone more qualified to be a U.S. president than his former secretary of state, Hillary Clinton. No one—not even himself.

On Wednesday night, Obama was introduced by Sharon Belkofer, the mother of Lt. Col. Thomas Belkofer, who was killed by a suicide bomber along with three other high-ranking U.S. officials in Kabul, Afghanistan. In a brief but touching speech, the grandmother of 10 talked about meeting the president after the death of her son. “As he was hugging me, I cried all over his suit. Tom would have been so embarrassed,” she said, drawing laughs from the crowd.

A video that played before the speech focused on the difficult choices the president faced while trying to pass the Affordable Care Act, and highlighted Obama’s decision to pursue the landmark healthcare legislation despite the risk to his reelection if it failed. It reflected as well the toll that mass shootings, such as the 2012 Sandy Hook Elementary School massacre, had on the president, while celebrating the economic recovery that followed his election, the recent nuclear treaty with Iran, the country’s restored diplomatic relations with Cuba, and marriage equality for LGBT citizens.

Fast forward to 6:04 for the introduction of President Obama.

Obama began his speech by reflecting on how much the country has changed since his address before the DNC eight years ago. “A lot’s happened over the years,” he said. “And while this nation has been tested by war and tested by recession and all manner of challenges, I stand before you again tonight, after almost two terms as your president, to tell you I am more optimistic about the future of American than ever before.”

More than anything on his travels, the president said he’s seen greatness from the American people. His words drew a sharp contrast between the perspective of the Democrats and that of Donald Trump, the Republican nominee, whose campaign has largely painted the U.S. as a failed experiment. “I’ve seen a younger generation full of energy and new ideas, not constrained by what is, ready to seize what ought to be,” the president said as protesters chanted in the background.

“After a century of trying, we declared that healthcare in america is not a privilege for the few—it’s a right for everybody,” he continued. “After decades of talk we finally began to wean ourselves off foreign oil, we doubled our production of clean energy, we brought more of troops home to their families, and we delivered justice to Osama Bin Laden.”

Obama: "Just ask the Marine who proudly serves his country without hiding the husband that he loves." pic.twitter.com/mr8FCK42BN

Although the party has achieved much during his presidency, he said, there’s still a lot of work to do. “We’re not done perfecting our union,” he said. He described the Republican National Convention last week as a “deeply pessimistic vision” of America. It wasn’t “particularly Republican and it sure wasn’t conservative,” he said.

Obama went on to describe Clinton as a knowledgeable, determined, and compassionate public servant. He talked about Clinton’s ability to “keep her cool” in the midst of a crisis. “No matter how daunting the odds, no matter how much people try to knock her down, she never, ever quits,” he said. “That’s the Hillary I know, that’s the Hillary I’ve come to admire.”

Meeting the families of those who lost loved ones during the terrorist attacks on Sept. 11, 2001, the president said, is what drove Clinton, a U.S. senator for New York in the wake of that fateful disaster, to demand funding for first responders and to help rebuild New York City. Those same searing memories, Obama added, are what drove her of as secretary of state when “she sat with me in the situation room and forcefully argued in favor of the mission that took out Bin Laden.”

“That’s why I can say with confidence that there has never been, a man or a woman—not me, not Bill, nobody—more qualified than Hillary Clinton to serve as president of the United States of America,” Obama said.

On Clinton’s running mate, the president offered high praise for the Virginia senator’s decades-long commitment to public service. “Tim Kaine is as good a man, as humble and as committed a public servant as anybody that I know,” he said.

The president only mentioned Trump a handful of times, but when he did, the crowd of delegates began to boo loudly. Obama then dug up one of his favorite old lines: “Don’t boo, vote.” He took another swipe at Trump near the end of his speech, referencing the Republican nominee alongside America’s enemies: “Anyone who threatens our values, whether fascists or communists, or jihadists or homegrown demagogues, will always fail in the end.”

As if passing the torch, Obama remarked with conviction near the end of his speech that the Democratic Party party is “in good hands” with Clinton.

He concluded by humbly acknowledging the shortfalls of his own administration. “There’s still so much I want to do,” he said. “But for all the tough lessons I’ve had to learn, for all the places where I’ve fallen short, I’ve told Hillary, and I’ll tell you what’s picked me up every single time,” Obama said. “It’s been you—the American people.”

And then Clinton walked on the stage.