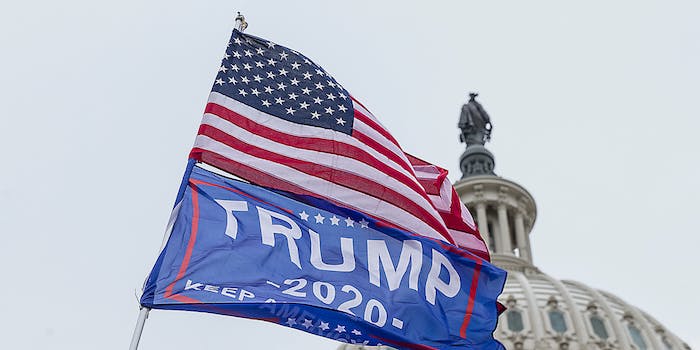 'Kraken Intel' was found hiding in the document.

A PowerPoint presentation given by former Chief of Staff Mark Meadows to the House committee investigating the Jan. 6 attack on the Capitol reveals how the Trump administration planned to overturn the 2020 presidential election. Now, new details uncovered in the document’s metadata could reveal those involved in the insidious plot.

Several slides detail how the U.S. Marshals Service could seize ballots in all 50 states before handing them over to “select federalized National Guard units” to be recounted.

Many of the conspiracy theories mentioned had already been publicly made by Rudolph Giuliani and Sidney Powell, who were both serving as attorneys for the Trump campaign, during their press conference at the Republican National Committee headquarters last November.

Incredibly, the document had already been circulating online since at least Jan. 5 after it was shared by Fox Nation journalist Lara Logan. It remains unclear how Logan came into possession of the document.

The document appears to have gone largely unnoticed due to the events of Jan. 6. The PowerPoint was quickly rediscovered after the House committee’s letter to Meadows demanding a copy of the document emerged online this week.

The PowerPoint piqued the interest of the independent investigative publication Trapezoid of Discovery, which began searching for phrases used in the document online. The search led the publication to the website of a conservative Spanish organization where an editable version of the PowerPoint was found.

The editable version allowed Trapezoid of Discovery to find new elements in the document, including an obstructed logo for “Kraken Intel.”

“When you convert a PowerPoint presentation to PDF, you lose metadata and the slides become flat images rather than editable layers,” the publication told the Daily Dot. “Since this was a version of the actual PowerPoint, I was able to spot that slide 29 had a white block obstructing a logo for ‘Kraken Intel.'”

While it’s unclear exactly who Kraken Intel is, Trapezoid of Discovery argues the name could be linked to pro-Trump conspiracy theorist and former Overstock CEO Patrick Bryne.

“I believe Kraken Intel *might* be the name for the intelligence apparatus that was organized by Byrne in order to collect and funnel technical information to Syndey Powell for use in her Kraken lawsuits,” the publication said.

Powell repeatedly made headlines following the election for her baseless accusations of voter fraud and promotion of outlandish conspiracy theories as she attempted to use the legal system to overturn the election for Trump. She frequently referred to herself as the Kraken, as well.

Kraken Intel, according to the publication, could also include notable QAnon conspiracy theorist Terpsichore Maras-Lindeman, known online as ToreSays.

While it’s too early to know for certain, the existence of the damning document will undoubtedly lead to further revelations regarding the disastrous events on Jan. 6.