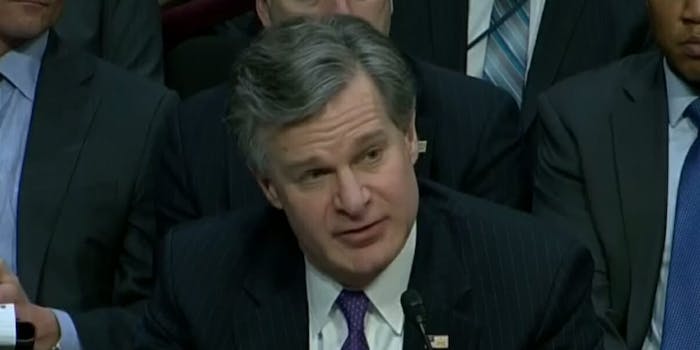 The FBI‘s newly-appointed Director Christopher Wray said on Tuesday the Trump administration should have known months ago about the behavior of Rob Porter, the White House staff secretary who resigned last week after allegations of domestic abuse surfaced.

Speaking before the Senate on Tuesday, Wray set out a timeline about Wray’s background check that challenged the narrative put forth by the White House

“What I can tell you is that the FBI submitted a partial report on the investigation in question in March, and then a completed background investigation in late July, that is—soon thereafter we received requests for follow-up inquiry, and we did the follow-up, and provided that information in November,” Wray said. “And then we administratively closed the file in January. And then earlier this month we received some additional information and we passed that on as well.”

However, as the Washington Post points out, the timeline seems to run counter to the message the White House has been saying since the news of Porter’s alleged domestic abuse broke. On Monday, White House Press Secretary Sarah Huckabee Sanders said the “process” was continuing to “play out.”

At the same time, as the FBI says it was forwarding the White House information about Porter’s background check, he was being considered for a job promotion, according to CNN.

The news outlet reports that there were “serious talks” about promoting the staff secretary amid his abrupt resignation. One spot he may have been up for was the deputy chief of staff position.

Chief of Staff John Kelly, who was criticized for his initial response to the allegations against Porter, “definitely wanted to expand” Porter’s role in the White House, a source told the news outlet.

Kelly’s claim that he acted and fired Kelly within “forty minutes” of hearing the news is being thrown into question.

Despite attempts to say otherwise, President Donald Trump also defended Porter after his resignation, lamenting that people’s lives were being “shattered” because of accusations like the one against Porter and telling reporters that he thought it was important to “remember” that Porter denied the claims.