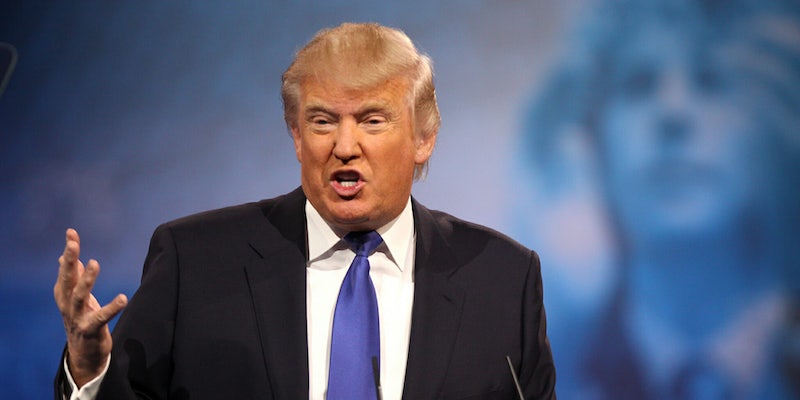 He's far more concerned with the lives being 'shattered and destroyed by a mere allegation.'

To hear President Donald Trump’s take on it, Rob Porter is a man being unjustly attacked.

The White House staff secretary resigned this week amid allegations of domestic abuse levied by his ex-wives, Colbie Holderness and Jennifer Willoughby. Speaking to reporters on Friday, Trump said he and the rest of the White House “certainly wish [Porter] well” and acknowledged that “it’s obviously a very tough time for him.” He praised Porter’s “very good job” and wished him a “wonderful career.”

Trump continued to side with Porter in a tweet Saturday morning.

In both his statements to the press and his latest tweet, Trump has insinuated that he thinks Porter is innocent and the allegations are false. Yet despite all his huffing and puffing, the president has neglected to once mention the women Porter allegedly abused.

Let’s focus on that grammatically nightmarish tweet. Trump bemoaned the lives being “shattered and destroyed by a mere allegation,” but he couldn’t be bothered to consider the lives that were shattered and destroyed by a man who allegedly punched his ex-wife in the face. (Holderness released photos of her face with a dark bruise around her eye, saying Porter punched her while they were vacationing in Italy.)

Trump also said, “There is no recovery for someone falsely accused.” This woe-is-me sentiment ignores the physical and emotional trauma that domestic abuse victims have to grapple with for years after being abused, if not the rest of their lives.

Apparently, they still take place—officials reportedly learned of the abuse claims against Porter during his background check months ago—but if nobody’s going to actually pursue the claims made against a member of the highest governmental body in the U.S., what the hell is the point of having them in the first place?

Too many damning questions and a never-ending typhoon of non-answers. Then again, considering the President of the United States is a self-professed pussy grabber, his tweet about the Porter fiasco comes as a disappointment, but hardly a surprise.