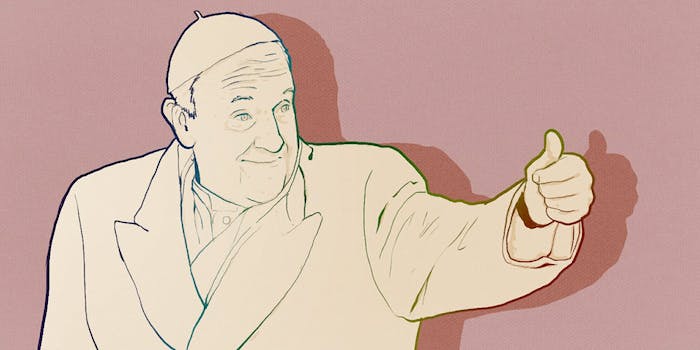 Francis' longtime friend came forward to defend him after news broke that he met with Kim Davis.

Pope Francis didn’t just meet with Kentucky county clerk Kim Davis during his U.S. visit. He also spent some time with a close friend who is gay.

Amid talk of Francis’ meeting with Davis, Yayo Grassi came forward on Friday to defend the pope, his mentor and friend of more than 50 years. Grassi said that he and his partner Iwan met privately with Pope Francis at the Vatican Embassy in Washington on Sept. 23. A video of the meeting shows the two warmly embracing one another.

“He is open to all kinds of people, including those with different sexual characteristics.”

“Three weeks before the trip, he called me on the phone and said he would love to give me a hug,” Grassi told CNN.

After news broke that the pope had met with Davis, who was jailed last month after denying marriage licenses to same-sex couples, liberals who remembered his previous statements about compassion toward same-sex couples were angry and confused. Social media lit up with criticism of the pope, who days earlier had earned plaudits from liberals for his stances on the death penalty, economic inequality, and global warming.

The Vatican took pains to downplay the meeting on Friday, explaining that it did not mean the pope supported Davis’ defiance of the law and even refuting elements of her story.

“[T]he only real audience granted by the Pope at the nunciature (embassy) was with one of his former students and his family,” the Vatican said in a statement.

“That was me,” said Grassi, who also told CNN that he believes Pope Francis was “misled” into meeting with Davis.

The Vatican confirmed that Grassi had met with the pope.

“The Pope did not enter into the details of the situation of Mrs. Davis and his meeting with her should not be considered a form of support of her position in all of its particular and complex aspects,” Holy See spokesman Father Federico Lombardi told the press on Friday.

Lombardi noted that the pope met with “several dozen persons” for “brief greetings” that “occur on all papal visits and are due to the Pope’s characteristic kindness and availability.”

Grassi told CNN that the Pope has known his friend’s sexuality for a long time and never condemned him for it. “He has never been judgmental,” he said. “He has never said anything negative.”

“Obviously he is the pastor of the church and he has to follow the church’s teachings,” Grassi added. “But as a human being he understands all kinds of situations, and he is open to all kinds of people, including those with different sexual characteristics.”