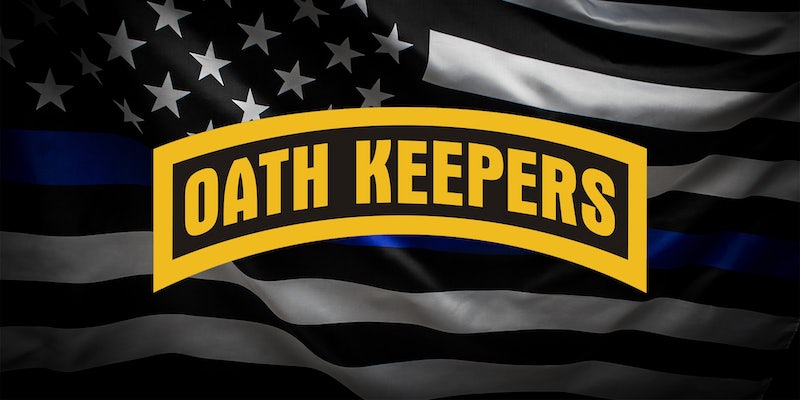 At least 80 politicians were in leaked Oath Keeper membership list

81 individuals in the leak were either running for or had served in public office as of early last month.

The names of numerous elected officials have been found on a membership list from the far-right Oath Keepers militia that was leaked by a hacker last year, according to a report from the Anti-Defamation League (ADL) Center on Extremism.

As first reported by the Daily Dot last September, the hacker provided the journalist and transparency collective Distributed Denial of Secrets (DDoSecrets) with roughly 5GB of data containing details on the group’s members and donors as well as emails and internal chats.

The list, as exclusively reported by the Daily Dot that same month, even exposed government and military email addresses. In total, the leak uncovered the email addresses of more than 38,000 individuals. The membership list does not detail, however, whether an individual is or was ever active with the militia.

The Oath Keepers were thrust into the national spotlight earlier that year after its members were found to have participated in the Capitol riot on Jan. 6 in Washington, D.C.

Now, the ADL reports that elected officials are also among those listed as having shown interest in the paramilitary group. An examination found that 81 individuals in the leak were either running for or had served in public office as of early last month.

“These individuals run the gamut from local office—mayors, town councilmembers, school board members—to state representatives and senators,” the report states.

One of the elected officials whose name was present on the list was South Dakota state Rep. Phil Jensen (R). Speaking with the Associated Press, Jensen stated that he had paid for a one-year membership in 2014 but never received any literature from the group. Jensen also said that he never attended any meetings nor renewed his membership.

The ADL’s analysis also zeroed in on members who belonged to law enforcement agencies as well as the armed services. First responders such as firefighters, fire chiefs, paramedics, and EMTs were also on the list.