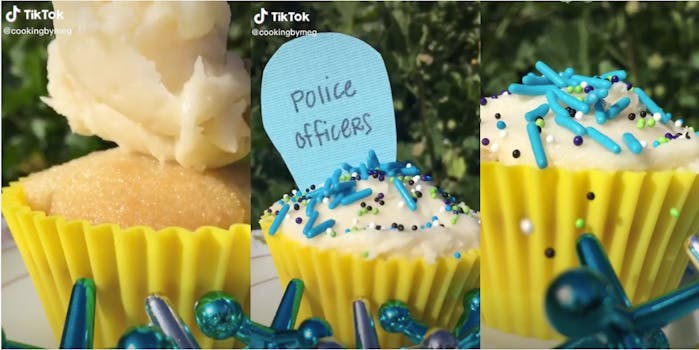 ‘We did it we ended police brutality’: TikToker dragged for using cupcake to address police violence

'I don't think this is coming off the way you this it is.'

A TikTok where the creator offers police a cupcake so they will “stop killing black people” is being fiercely criticized online and is giving people major Kendall Jenner in the Pepsi commercial vibes.

A baking account called @cookingwithmeg posted a video where a cupcake is frosted with white icing and blue sprinkles while the creator talks about ending police brutality. The video was posted five days ago, meaning it was posted just ahead of the verdict being announced in the trial for Derek Chauvin, the police officer who killed George Floyd.

“If you’re a police officer, this cupcake is for you,” the voiceover in the TikTok. “Please stop killing Black people.”

The police killing of Floyd sparked a Black Lives Matter movement across the world and online. Chauvin was found guilty in the death of Floyd on Tuesday.

In the wake of the verdict, many Black creators have called out white creators for performative posts and have demanded more than simply putting “BLM” in an account bio.

TikTok users are blowing up the comment section on the cupcake video with sarcastic praise like “this cupcake ended police brutality thx babe.”

Others are comparing the video to model Kendall Jenner’s Pepsi commercial where she breaks through a protest to give a police officer a soda. The message of unity was not well received by the internet for that either.

“I don’t think this is coming off the way you this it is, feels very Pepsi commercial,” one TikTok user said of the cupcake video.

Another said it had “Kendall Jenner energy.”

Other creators are dueting the video to sarcastically thank @cookingbymeg for solving police brutality.

But the mockery didn’t just stay on TikTok. People on Twitter are making fun of the attempt to end police brutality as well.

“omfg we did it we ended police brutality,” one person posted.

“just saw someone on tiktok bake a cupcake to try and repair the relationship between black people and the police…that app will kill me one day i swear,” someone else said.

“This tiktok just ended police brutality with a cupcake,” another posted.

“white ppl on tiktok have done lost their minds, i just saw this women make a blue cupcake and asked police officers to stop killing black ppl…..” someone else tweeted.

Somehow baked goods don’t seem like the thing that will end police brutality.