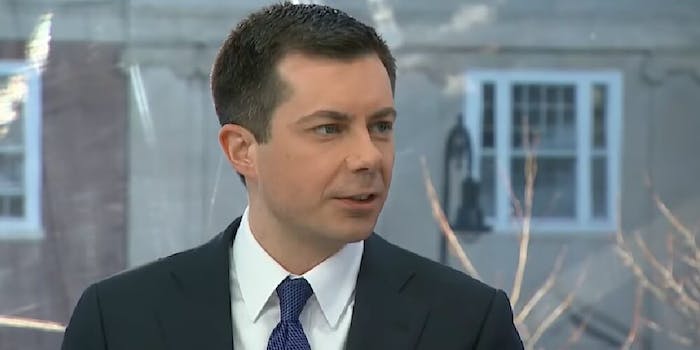 He was nearly arrested, he adds.

A progressive activist who advocates for Medicare-for-all wrote in a personal essay that the Pete Buttigieg campaign on Saturday tried to have him arrested for handing out flyers at the Democrat’s New Hampshire event. His stunt got him a one-year ban from the premises, he claims.

Political activist Norman Solomon wrote about the experience on Common Dreams, a progressive news website. He described a confrontation between himself and an alleged representative of the campaign, which escalated to Solomon receiving a criminal trespassing notice.

Published tonight: "Why the Buttigieg Campaign Tried to Have Me Arrested for Handing Out These Medicare for All Fliers" – https://t.co/5OJf0cToer via @commondreams #ourrevolution #berniesanders #peopleforbernie #aoc #berniesanders2020 #feelthebern #4bernie #bernie #bernie2020

As Buttigieg was campaigning inside of Keene State College in New Hampshire on Saturday, Solomon was outside handing out flyers that advocated for the universal healthcare program. Someone with a metal badge from the campaign told Solomon that he couldn’t pass out the leaflets.

That’s when Solomon reminded him of the right to freedom of speech on public grounds. When Solomon refused to leave, two Keene State officers showed up and eventually issued Solomon a one-year ban from the campus, he alleges.

“So much for freedom of speech and open election discourse in public places,” Solomon wrote in his essay.

Solomon said he believes that the campaign targeted him because of the information in support of Medicare-for-all. It contradicts Buttigieg’s most recent stance on the healthcare program.

During Democratic debates, Buttigieg has often criticized other presidential hopefuls, like Sen. Bernie Sanders (I-Vt.), for supporting Medicare-for-all. He has, instead, pushed a program he’s named “Medicare for all who want it.”

But that contradicts Buttigieg’s 2018 tweet in which he wrote that he “affirmatively and indubitably, unto the ages,” favors Medicare-for-all.

Gosh! Okay… I, Pete Buttigieg, politician, do henceforth and forthwith declare, most affirmatively and indubitably, unto the ages, that I do favor Medicare for All, as I do favor any measure that would help get all Americans covered. Now if you'll excuse me, potholes await.

Solomon’s column enranged some Twitter users, who said that Buttigieg was not being honest about his previous Medical For All stance.

“He has been Medicare For All forever. Wow. Wall Street Pete has certainly let us know who he really is,” labor activist RoseAnn DeMoro wrote.

What a narc! @normansolomon is 100% solid. He has been #MedicareForAll forever. Wow. #WallStreetPete has certainly let us know who he really is. #Bernie2020 – https://t.co/cnhTsRuULK via @commondreams