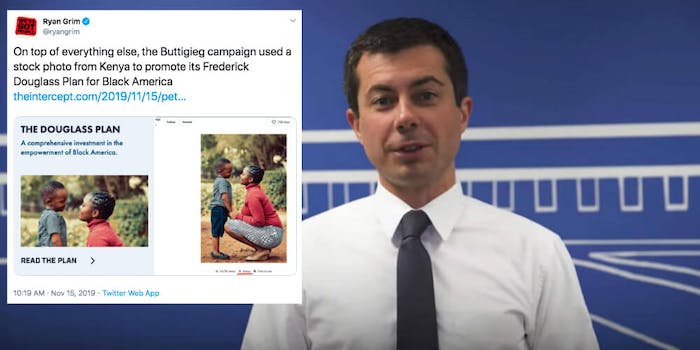 Presidential candidate Pete Buttigieg‘s “Douglass Plan,” a policy plan aimed at addressing America’s longstanding history of racism against Black Americans, was met with support when it was first released in early 2019. Now, it is at the center of controversy after some Black leaders decided to distance themselves from Buttigieg, alleging he faked their endorsement of his plan.

And, to make matters worse, someone pointed out a stock photo used to market the plan featured a Kenyan woman and her child.

“We are over 400 South Carolinians, including business owners, pastors, community leaders, and students. Together, we endorse his Douglass Plan for Black America, the most comprehensive roadmap for tackling systemic racism offered by a 2020 presidential candidate,” the letter reads.

Some of the Black leaders listed in the memo never outright supported the plan and others weren’t even Black at all.

Update 8:18am CT, Nov. 17: Sean Savett, the rapid response communications director for the Buttigieg campaign, told the Daily Dot that the campaign has “been clear that not every supporter of the plan is Black, and have never claimed otherwise in any public communication.”

“I think the way they put it out there wasn’t clear, that it was an endorsement of the plan, and that may have been intentionally vague,” Devine told the Intercept. “I do think they probably put it out there thinking people wouldn’t read the fine print or wouldn’t look at the details or even contact the people and say, ‘Hey, you’re endorsing Mayor Pete?’”

Savett told the Daily Dot that the campaign “never gave the impression publicly that these people were endorsing Pete, only that they supported the plan.”

Devine reiterated that she endorsed the plan, not the candidate in a tweet on Saturday.

“Although I have not endorsed a candidate for President yet, I do support the Douglas Plan by Presidential Candidate @PeteButtigieg. This is a comprehensive plan to address economic inequities,” Devine wrote.

Although I have not endorsed a candidate for President yet, I do support the Douglas Plan by Presidential Candidate @PeteButtigieg. This is a comprehensive plan to address economic inequities. Read about the plan and share your thoughts: https://t.co/KyeLA9u38h

Thigpen, who is a Bernie Sanders supporter, called the letter downright inaccurate, and Cordero said he only provided feedback on the plan and certainly never endorsed Buttigieg.

So how did their names end up in the letter?

The campaign allegedly emailed everyone who would be named in the endorsement letter, but they were only given a couple of hours to respond before it was released. Those who didn’t get back in time lost the opportunity to opt-out of the endorsement.

“After they indicated their support, we reached out to people multiple times giving them the opportunity to review the language of the op-ed and the option to opt-out. We did hear from people who weren’t comfortable being listed and we removed them,” Savett told the Daily Dot.

The Intercept reported that it believes many of the letter’s signatures were from white people or repeated names. It also pointed out that this appears to be the final nail in the coffin for the campaign’s attempt to win over Black voters.

Even a stock photo used to promote the Frederick Douglass plan for Black Americans is from Kenya.

“On top of everything else, the Buttigieg campaign used a stock photo from Kenya to promote its Frederick Douglass Plan for Black America,” Ryan Grim, D.C. bureau chief at the Intercept, tweeted, along with a side-by-side of the stock photo on Buttigieg’s campaign website and the stock photo with its Kenya location tagged.

While the photo appears to be gone from the campaign site, it is still available to see after the webpage was archived.

On top of everything else, the Buttigieg campaign used a stock photo from Kenya to promote its Frederick Douglass Plan for Black America https://t.co/OqnGSIqCLS pic.twitter.com/qBqei71TdA

“Pete will continue to talk about the Douglass Plan wherever he goes, regardless of the audience, as there are many communities of Americans committed to eradicating racial inequity,” Savett told the Daily Dot.