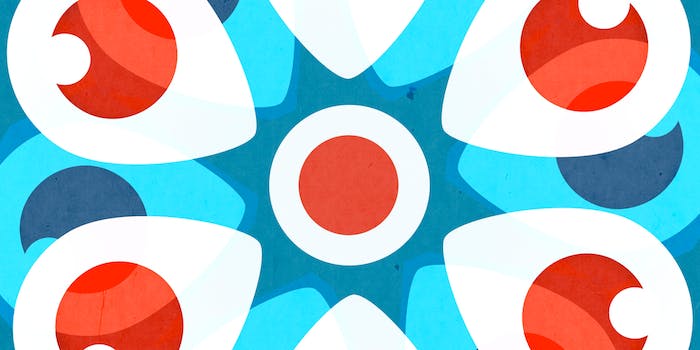 Your essential guide to Periscope

The streaming app that lets the world see what you see.

Why did 20,000 people tune in to watch a giant puddle in Newcastle, England? How did the world watch Democrats hold a more than 24-hour sit-in on the House floor even after Republicans shut off the cameras? It’s all due to a free streaming app called Periscope.

Periscope lets anyone with a camera-enabled device (such as an iPhone or a GoPro) broadcast live video to the public. Since Periscope’s launch in 2015, more than 200 million broadcasts have been created on the platform. Anyone can watch a Periscope feed—you don’t have to be a member or download the app. Periscope users can comment as they’re watching your feed and strangers can watch you in real-time and send insults, compliments, or hearts.

Giving the world a free tool to broadcast live video has resulted in outcomes both negative and positive. The darker side of Periscope is in full force. In March 2016, a woman in London was raped on Periscope. The stream had over 2,800 viewers, according to Buzzfeed. Not even a month later, a woman in Ohio was charged for streaming her underage friend’s rape on the platform. A French woman streamed her suicide back in May 2016.

Periscope’s chat feature, which allows any  viewer to comment on a stream, has spawned plenty of harassment. The platform announced in May 2016 that it would ask “flash juries” to vote on whether comments were offensive or not. Like Twitter, Periscope users can be banned from the platform.

Periscope has also proved to be incredibly useful. Most recently, House Democrats led by Civil Rights activist Rep. John Lewis (D-GA) held a sit-in on the House floor on June 22 in order to force a vote on a gun control bill. Refusing to give them any more exposure, Republican leadership turned off the House cameras. C-SPAN, which relies on footage from the House cameras, promptly went dark. Without the public being able to watch or listen to Democrats giving speeches on the floor, the sit-in seemed doomed to be forgotten.

But when Rep. Scott Peters (D-CA) began broadcasting a feed through the Periscope app due to a suggestion from his young press assistants, things quickly took a different direction. Thousands of people began watching the Peter’s Periscope feed, and eventually C-SPAN picked it up.

Twitter Government wrote in a tweet the following morning that the broadcast by Peters and fellow Rep. Eric Swalwell (D-CA) had been viewed over 1 million times.

Tweets sent today from @ScottPetersSD and @RepSwalwell with #Periscope broadcasts have now been viewed over 1M times and counting.

Because of Periscope, the public was able to see House Democrats hold the floor until the wee hours of the morning. Viewers could see Republicans interrupt and yell over their Democratic colleagues as they testified about the victims of the recent mass shooting in Orlando, San Bernardino, Sandy Hook and other incidents. #HoldtheFloor and #NoBillNoBreak quickly began trending on Twitter.

Wrote the Verge of the House sit-in:

It was a thrilling moment — one in which tools made possible by the internet shifted the balance of power inside the people’s house, drawing new attention to the gun control debate and to the 49 people murdered this month at a gay nightclub in Orlando.

Periscope has also become an unlikely aid in solving crimes. Indian police are asking citizens to Periscope crimes that are in progress; this would allow police to see the crime’s location as well access video evidence. Two Utah teens who broadcast their heist of an ice truck were promptly caught and arrested by police. Another Florida woman drove drunk while streaming on Periscope.

But what does a typical day on Periscope look like? The offerings range from interesting to questionable to mundane. People will broadcast their vacations, concerts, and sporting events. Companies will host live Q&A’s. Musicians will take song requests. 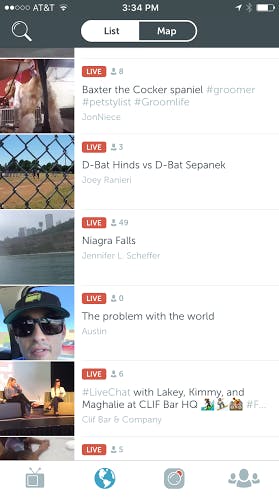 Now that you have the run-down on Periscope, here’s everything you need to get started:

Simply download the Periscope app from Apple’s App Store or Google Play on your smartphone. You can also broadcast using a GoPro.

How do I stream on Periscope?

Once you launch the app, open the “Broadcast” tab by tapping the Camera icon at the bottom center of the app.

A window will pop up that looks like this: 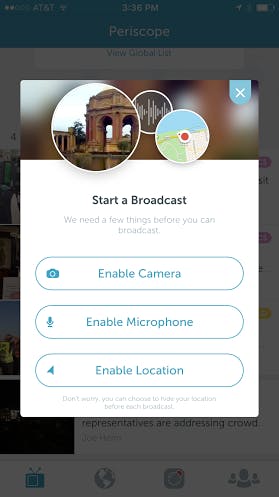 Be sure to enable your location, microphone, and camera. Enabling your location comes in handy if you’re at a public event or a specific landmark users may be searching for (i.e. a Radiohead concert, the Grand Canyon).

Otherwise, you have the option of disabling location tagging. You can do that by shutting off the compass icon on Periscope’s Broadcast Tab.

How long do broadcasts last on Periscope?

You can either have your broadcasts auto-delete after 24 hours or save them to your camera roll. Simply go to “Settings” and select either “Auto-Save to Camera Roll” or “Auto-Delete After 24hr”.

What are some do’s and don’ts for Periscope?

No one expects you to be a documentary filmmaker on Periscope—shaky and amateurish footage seems to be one of the endearing quirks of the platform—but make sure you follow these basic tips. Hold your smartphone steady, or consider investing in a tripod for longer shots.

Make your Periscope title as descriptive as possible and make ample use of hashtags. This will help users discover you on the platform. State the location and the purpose of the stream. Are you backstage at Bonnaroo? Are you flying your drone for the first time? Make sure it’s clear from the title.

Slap on a descriptive hashtag or two, tweet out your stream, and you should have an audience in no time.

Finally, be prepared for the occasional sicko or two—especially if you’re filming yourself. If you are being harassed on Periscope to any degree, be sure to save the footage and report it here.

Do I have to have the Periscope app installed in order to watch Periscope broadcasts?

No. Anyone with a link to a Periscope feed can watch it on their browser. If you have the Twitter app already installed on your mobile phone, you can also record a broadcast without first having to go through the Periscope app. 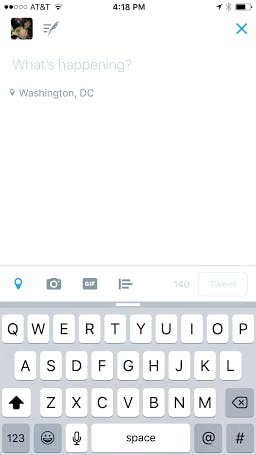 Tap on the Camera icon in the bottom center. Then, tap on icon that says “Live”. You’ll be directed to Periscope’s “Start a Broadcast” window.

If you don’t have Periscope already downloaded, you’ll be re-directed to to the App Store.